Miriam Lord: It’s all in a day’s work for Síoda and Bród

The First Dogs are more than ice-breakers, ‘they’re also a great source of wisdom’ 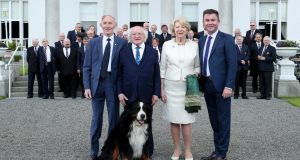 President Michael D Higgins, with one of his dogs, and his wife, Sabina, with Pat and Michael English at the Presidential Concert, celebrating Irish country music in Áras an Uachtaráin.

Friday was National Bring Your Dog to Work Day.

Michael D brought along Síoda and Bród for his working day.

But there is nothing unusual in that. In the case of our President, the First Dogs regularly accompany him as he goes about his business in the Áras.

For the working day that was in it, we asked President Higgins yesterday about his beloved Bernese.

“The dogs are not merely ice-breakers, they’re also a great source of wisdom, and they must be protected from the stresses of the Anthropocene,” said he, showing off.

That, and the sly feeding of treats from under the tables.

Síoda is quite a refined young lady compared with Bród, who is an attention-seeking male and cannot resist a stage or a camera opportunity

When not Giving the Paw for Ireland, the presidential pooches like to hang out with Michael D in his study while he works. He keeps some gorgeous photographs of them, and the much-missed Shadow, in his desk drawer and loves showing them to people. He also has a growing collection of Bernese Mountain Dog soft toys, sent by members of the public, dotted around the office.

Síoda and Bród are two of the main attractions during garden party season in Áras an Uachtaráin, when the question most asked of the President and his wife Sabina is: “Where are the dogs?”

Usually hogging the limelight nearby or hovering in the vicinity of the cocktail sausages.

Síoda is quite a refined young lady compared with Bród, who is an attention-seeking male and cannot resist a stage or a camera opportunity. Two big softies, they love all the fuss and notice, but never wander far from Michael D’s side.

They are starring again this weekend at the final garden parties of the 2019 season.

Youth organisations Macra na Feirme and the Union of Students in Ireland are honoured on Sunday. The theme for the day is “Participation and Transformation”, fitting in with the President’s continuing efforts to encourage young people to “take charge of change” and become more involved in decision-making processes.

Meanwhile, the Áras hosted some of the biggest names in Irish country music at a special concert on Friday evening to recognise the work done by organisations working with rural communities around the country.

Guests were drawn from a range of local community groups, along with representatives from national organisations such as Muintir na Tíre, Irish Men’s Sheds, Volunteer Ireland, Irish Rural Link and farmers’ associations.

The event was also a celebration of the Irish country music scene and among the performers were Robert Mizzell, Louise Morrissey, Jimmy Buckley, Margo O’Donnell, Pete St John, Michael English and Mike Denver, as well as the Airport Police Fire Services Band.

Dining at the Oireachtas

Ceann Comhairle Seán Ó’Fearghaíl is always looking for ways to make Leinster House more accessible to the public and a better workplace for the many who labour away within its confines.

Along with Oireachtas staff and public servants, the number of people based in Leinster House is around the 1,000 mark when politicians and staff from all the parties, along with members of the press gallery, are taken into account.

Ó’Fearghaíl has been very busy this year, launching exhibitions inside and outside the building to mark the centenaries of women’s suffrage and of the Dáil itself, while also staging social events such as charity fundraisers in Leinster House.

On Tuesday, following on the success of his inaugural showcase last year, the Ceann Comhairle hosted his second All-Ireland Food Fair in the members’ restaurant on Tuesday. Ó’Fearghaíl is a keen supporter of quality Irish artisan and craft food and he believes the national parliament should be a place where this produce is championed.

The showcase was pulled together by Kildare Farm Foods, a company which distributes Irish artisan produce worldwide and to high-end restaurants at home. Run by three generations of the Sexton family, the food comes from their own land and from 15 “passionate” producers from all over the country.

“Over 100,000 visitors pass through Leinster House every year,” the Ceann Comhairle told us. “What we serve here is all of Irish origin but I would love if we could move beyond that to include high-end and high-quality Irish craft foods. We really should be supporting the producers here, of all places.”

He points out that politicians can be “opinion leaders” in their own regions and it’s a good idea for them to know about the best that Ireland can offer. “We can encourage constituents to support and promote their local craft producers.”

Tickets for Tuesday’s evening in the Oireachtas restaurant cost €20 a head. “Totally self-financing with no cost to the Oireachtas or the taxpayer,” stressed Ó’Fearghaíl, who hopes the food fair can become an annual event.

The main courses were rack of John Stone sirloin of beef, dry aged in Longford, Manor Farm breast of Chicken, and rack of Wild Atlantic lamb from Duvillaun Beg island near Achill.

Dessert was from Killowen Yoghurts and there was Cooleeny cheeseboard with relish from Wild About in Wexford.

Fianna Fáil leader Micheál Martin, who is very careful about what he eats, called in and went home with a bottle of Wild About’s sparkling nettle drink, while Mattie McGrath was cock-a-hoop about the apple juice when he heard it was “crushed near Clonmel”.

This was organic apple juice “from the orchard of Áras an Uachtaráin” which is specially bottled for the President by Con Traas of The Apple Farm in Tipperary and served at events in the Áras.

A consignment of what people were calling “Apple an Uachataráin” was sent over to the Ceann Comhairle by President Higgins.

There was music and a little wine. Julie Lyons, catering organiser on the Oireachtas side, arrived to pour a glass for the Ceann Comhairle from a wicker wine bottle holder.

Fine Gael for Louth, Fergus O’Dowd, was in very bad form at this week’s parliamentary party meeting. It might have been something to do with his appearance on Monday on Virgin television’s Tonight show when fellow panellists included Eamon Dunphy, who took a few swipes at the Government backbencher.

O’Dowd informed the party meeting he was fed up with, among other things, Fine Gael TDs being called “Tory boys”.

He then had a right go at the party’s Ministers. Fine Gael may have 28 of them, but a deeply unimpressed Fergus said he could name only “10 or 15” of them at a push.

“What are they doing half of the time?” he asked his fellow deputies.

Damned if they could tell him.

Given the sharp decline in fortunes suffered by Sinn Féin in the recent elections, we hope there was no plotting over the party’s leader at the recent Bon Jovi concert

Fergus didn’t mention any names when he was delivering his rant, but for some reason, Eoghan Murphy from Dublin 4 was the one Minister who responded to the Fine Gael Tory Boy complaint.

Funnily enough, nobody else laughed.

Meanwhile, given the sharp decline in fortunes suffered by Sinn Féin in the recent elections, we hope there was no plotting over the party’s leader at the recent Bon Jovi concert in the RDS.

A large contingent from the party enjoyed the show, chief among them TD Pearse Doherty and MEP and prospective TD Matt Carthy, who are close colleagues from the northern end of the country and have figured in idle talk about who might replace Mary Lou McDonald in the distant future.

A case of “Shot through the heart, and you’re to blame, Matt and Pearse from Sinn Féin, Sinn Féin.”

Definitely not. They are big Bon Jovi fans and have attended concerts together in the past, apart from Sunday’s “This House is Not for Sale” tour gig.

Monday’s contrived footage and photos of the Cabinet travelling by Dublin Bus to the launch of the Government’s Climate Aspirations Plan in Grangegorman brought to mind the (probably apocryphal) yarn doing the rounds many years ago about the late Garret FitzGerald.

So the Fine Gael leader bravely marched to the nearest stop with his aides and stuck out his hand when the vehicle with the correct number approached. He climbed on board and briskly addressed the driver.

Almost all members of Cabinet travelled on the out-of-service bus for the first leg of their short journey. Just three of them managed the return trip.

And then he bustled down the aisle to find a seat, to the bemusement of all.

It goes to show that politicians have always been interested in “the optics”, but not to the obsessive extent they are now.

Leo Varadkar, leading his hybrid Cabinet from a hybrid bus for the sake of the optics, might have seemed like a great wheeze, but it was on the same level of cringe as one of those stagey “getting down with the young people” photo ops.

People either laugh or get more annoyed.

As a matter of interest, almost all members of Cabinet travelled on the out-of-service bus for the first leg of their short journey. Just three of them managed the return trip.

After the launch, and having taken care of the optics, the rest shot off separately, driven away in ministerial cars.