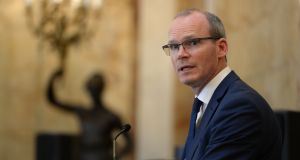 The Government aims to introduce comprehensive legislation before the end of the year to protect children from inappropriate online material, the Dáil has heard.

Tánaiste Simon Coveney said rather than trying to have a law in place before the summer recess, “realistically we are talking about a slightly longer timeframe”.

This would allow Minister for Communications Richard Bruton to consult all stakeholders including parents, academics, non-government organisations and industry.

Fianna Fáil deputy leader Dara Calleary told the Tánaiste that in 2017 then minister for communications Denis Naughten said elements of an action plan could be fast tracked into legislation. But two years later they were still waiting and nothing had happened.

He called on the Government to lay down a timeline that the Dáil would not break for recess to ensure that work would be done and that “we won’t just move on and forget it”.

Mr Coveney said that Mr Naughten had put in place 15 short to medium-term actions. He said “we now know it’s not enough” and that was why Mr Bruton had set up a consultation process.

The Tánaiste stressed that “we need to get it right” and he did not think it was possible to put a legislative framework in place by the summer recess, but it was realistic by year end.

During leaders’ questions Sinn Féin deputy leader Pearse Doherty said existing legislation at committee stage could be developed or an all-party committee could be put in place to have the legislation in place by the summer recess.

Mr Doherty had called on the Government to use his party’s private member’s Bill on digital safety which is currently at committee stage.

He said the Bill introduced in February of last year had gone through pre-legislative scrutiny, had received unanimous Dáil support and was backed by a number of children’s organisations and the Children’s Ombudsman.

He added that “it doesn’t matter who introduces the Bill or gets credit but what matters is we need to get it done quickly and protect our children”.

The Donegal TD suggested that “if you’re not in favour of the Bill then let’s convene an all party committee on online safety to work on a Bill and get it to legislation by summer”.

The Tánaiste said the time for self-regulation was now over and Minister for Communications Richard Bruton was committed to legislation.

The Government was not “party political about who brings forward the legislation”.

But he said rather than trying to get it in place before the summer they should “get it right” and realistically it would be the end of the year by the time it was ready to allow for all the necessary consultation and then to bring forward a comprehensive piece of legislation.

The issue had been raised in the Dáil on Wednesday in the wake of case in which two 14-year-old boys were convicted of the murder of schoolgirl Ana Kriégel. Thousands of images of pornography were found on the phone of one of the boys.

Labour Party leader Brendan Howlin highlighted legislation in the UK to prevent such material being accessible to children and Taoiseach Leo Varadkar said a review could take place in time to see whether the new UK law is effective.