Social Democrats must heal divisions to capitalise on momentum 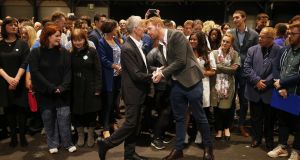 The story of this year’s local elections was driven by narratives around the biggest winners and losers, and the Civil War politics of Fine Gael and Fianna Fáil.

The major talking points undoubtedly centred on the “Green wave”, the Sinn Féin crash, and then around which of the two larger parties could claim the biggest victories whether at domestic or European level.

Amid all of this, the quiet success of some smaller parties went somewhat under the radar, and this is perhaps true for the Social Democrats.

It has not been plain sailing, as evidenced by the party’s attempt to win a seat in Europe, and the story that lies behind it

The party trebled its representation at local level with 19 councillors elected. It fielded 58 candidates, 45 of whom were standing for the first time.

When all the votes were counted, 15 first-time candidates would be elected. The party now has five councillors on Dublin City Council, four on Kildare County Council and two on Fingal County Council. There were also successes in Galway City, Limerick City, Offaly, Cork County and Meath.

The party just missed a target of having 20 councillors elected and its next goal is to build on its two seats in the Dáil, with strategists targeting six more.

Such a result would give the Social Democrats a strong hand in any potential coalition talks.

Quadrupling its number of TDs may seem like a tall order, but the party’s co-leaders Catherine Murphy and Róisín Shortall think it is doable.

“I certainly think it is possible but we still have to do a piece of analysis and some of that is looking at particular constituencies and what it would take [to succeed] and that is organisational and financial,” says Murphy.

It has not been plain sailing to this point, however, as evidenced by the party’s attempt to win a seat in Europe, and the story that lies behind it.

Originally, the leadership were unsure about running anyone and were not fully convinced it would be worth the investment. Regardless, Gary Gannon, a Dublin city councillor, sought a nomination. There wasn’t a wealth of enthusiasm for his campaign at the top level, sources in the party have indicated.

Intra-party relations further soured when Gannon championed Ellie Kisyombe as a candidate for the local elections. From Malawi, she was the first person living in the direct provision system to run for election.

When media reports raised questions about Kisyombe’s back story, Gannon stood squarely behind her despite growing unease inside the party. It emerged that Gannon and members of the Dublin Central branch threatened to quit en masse if Kisyombe was removed from the ticket.

A review into her candidacy concluded that she should plough on, but the strain between the branch and the leadership lingered on.

Gannon went on to secure almost 30,000 votes, outpolling Labour candidate Alex White, a former minister. Few predicted that he would do so well.

Indeed, in the RDS count centre, candidates were observed at one stage or another with their party leader, whether on the cusp of election or elimination.

When he was eliminated shortly after White, a small cheer went up among Gannon’s supporters as they embraced him, but there was no sign of Murphy or Shortall.

The party is now, perhaps, looking at Gannon’s digitally-focused campaign through different eyes: he was clearly a vote getter among the demographic the Social Democrats is targeting.

He secured the second-highest preference among 18-24-year-olds, according to RTÉ’s exit poll. His team created viral videos and generated considerable engagement on Twitter and Facebook during the campaign.

The party holds its annual conference on Saturday and Gannon is listed to give the welcoming address. Party literature for the conference describes his recent tilt as “inspirational”.

Some in his branch in Dublin Central have privately expressed doubts about the future direction of the party and about its policies or aims. The root of this goes all the way back to the formation of the Social Democrats in 2015 when Stephen Donnelly, now of Fianna Fáil, was the third co-leader.

One source who worked closely with Donnelly, Murphy and Shortall during that early period spoke of a chaotic period filled with “intense paranoia”. The personalities of the three, it is said, made for an “unhappy mixture”.

“There would be hours-long meetings, and nothing would get done. The party didn’t know what it was and it became all about getting into the news, no matter what the subject, often with proposals that were not costed,” the source said.

“Some of the leadership were very difficult to work with. There was an intense paranoia, too, about Stephen Donnelly that he was somehow trying to take over the party. There was unease about his prominence. The party had not hammered out the key questions like, who are we? Are we the Labour you can trust? Are we more to the left of Labour? A lot of really good, earnest and sincere people who were on board became cynical and jaded.”

Other problems which became evident at the time included a lack of communication between HQ and the membership, the source said.

Four years later, similar tensions still appear to be simmering. A motion due to be debated at the conference notes a “democratic deficit” for councillors in the party, who feel left out of the policy formation process.

Murphy says work is ongoing on setting out a manifesto that can command support.

“We are very clear that we have a social democratic political orientation. How you actually articulate that will be where some of the work is going into,” she says, adding that there have been clear stances on childcare, housing, tackling corruption and abortion.

Indeed, it appears the Social Democrats has been buoyed by its support for repealing the Eighth Amendment.

“Will the government focus on a social democratic programme? That will be the number-one important thing. It certainly will not be about Mercs and perks...”

A common thread is that all three were heavily involved in local campaigns on the abortion referendum.

The Social Democrats can also be heartened by the fact that more than half of its councillors are women. Political parties who surpassed the minimum of 30 per cent of women candidates are entitled to €250 per female candidate in funding from the State, which is to be used for increasing diversity – a small but welcome boost with a general election that will be its biggest challenge to date on the horizon.

Will the Social Democrats be open to talking to Fine Gael and Fianna Fáil about entering government should it grow its Dáil numbers?

“If we were to consider going into a coalition, we would have to go back to our members,” Murphy says. “You wouldn’t be going back without a rock solid programme for government.

“Will the government focus on a social democratic programme? That will be the number-one important thing. It certainly will not be about Mercs and perks, it will be about the programme. We will dismiss nothing in advance.”