Johnson or Corbyn? Britain goes to polls after five-week campaign

Inside Politics: Voting continues until 10pm when a joint exit poll will give first glimpse of results 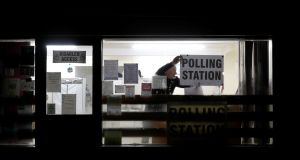 A polling station is set up in Lydd, Kent, as voters go to the polls in Britain’s general election. Photograph: Gareth Fuller/PA Wire

After an extraordinary five-week campaign, the British public will today go to the polls to make a choice that could define the next decade of politics for the UK and for Ireland.

Voting will continue until 10pm when a joint exit poll will give us our first glimpse of the results.

In 2017, the exit poll predicted a hung parliament, and before that in 2015 it predicted a Conservative majority, so this will be watched closely.

The last day of campaigning was suitably bizarre, beginning with reports that Boris Johnson had ducked into a fridge to avoid the media and ending with Labour leader Jeremy Corbyn telling supporters in Bedford: “I don’t have to hide in a fridge when somebody comes to ask me a question.”

Given Johnson has repeatedly described his Brexit deal as “oven-ready”, it was probably a fitting way to end the campaign.

All joking aside, it is hard to underestimate the effect this election will have on our own political affairs.

The prevailing wisdom is a thumping Conservative majority - which seems much less likely than it did five weeks ago - would see Johnson push his Brexit deal through in the new year, and this in turn would take away Fianna Fáil’s final justification for facilitating Fine Gael in a confidence-and-supply agreement.

In this case, talk will turn (knowing us, as soon as 10pm) to a February election at home.

If there is a hung parliament, it would seem the path to government is skewed in Corbyn’s favour because it is harder to see what alliances the Conservatives can rely on. Those who follow Brexit developments closely believe that if the Labour leader was in such a position, he would ask the EU for another extension to negotiate further and allow a deal to be put to a referendum.

Media reports in the UK have speculated Labour has consolidated its support in metropolitan remain areas, but we will not have the full picture until tomorrow.

Of course, the ramifications are not just political. This is far-reaching stuff, and so say the ESRI.

In his piece Eoin Burke-Kennedy reports on how the Irish economy could benefit if Johnson secures a parliamentary majority.

“If the Brexit issue is resolved in the short term there may be a bounce associated with that,” the ESRI’s Prof Kieran McQuinn has said.

In terms of events in Northern Ireland, Gerry Moriarty points out here political anoraks will likely have to stay up to after 4am before they know all the MPs that will be returned to sit in the next House of Commons.

The first results from Northern Ireland’s 18 constituencies are expected to start coming through from shortly after 1am, and barring recounts the final seat is due to be declared sometime after 4am.

Watching closely from Brussels will be Taoiseach Leo Varadkar and Minister for European Affairs Helen McEntee, both attending a meeting of the European Council today.

Alongside fellow leaders, Varadkar and McEntee will discuss the next steps in Brexit ahead of the UK’s expected departure on January 31st. Climate change and the next seven-year EU budget are also on the agenda.

Here is Denis Staunton’s front-page piece on the final day of the British election campaign.

As always, we will have all the breaking news from the UK, Brussels, Dublin, Belfast and beyond on irishtimes.com.

It’s Election Day. After a five-week campaign that saw Boris Johnson accused of wholesale dishonesty and callousness toward the victims of Conservative austerity, Jeremy Corbyn denounced as a threat to national security and indifferent to anti-Semitism, and Jo Swinson sinking in public esteem to be the most unpopular of this unloved trio of leaders, polls opened across the United Kingdom at 7am. Read more here.

There were raucous scenes in the Seanad last night after the Government wheeled out the metaphorical guillotine and cut off debate on the Judicial Appointments Bill.

It passed the Seanad by 25 votes to 23, but it will continue along its historical path of being the most debated Bill in the history of the Oireachtas, nonetheless. That is because it now has to go back to the Dáil for debate where up to 60 amendments are expected.

It has been championed by Minister for Transport Shane Ross who wants to limit the role of politicians and the judiciary in the appointment of judges, and he wants to have a non-legal majority on the board that will appoint new judges.

In her piece today, Miriam Lord says that “a win is a win. Minister Ross, aka Winston Churchtown, must have been ecstatic”.

Here’s a report on what happened, and what happens next, from Marie O’Halloran.

A funicular will not be installed in Dublin’s Phoenix Park, but driverless shuttles, a train station and new visitor facilities are still on the cards, writes Olivia Kelly.

There is more bad news for the FAI, writes Jack Horgan-Jones.

In news that will disappoint many adopted people, it has emerged plans for a new adoption law that would favour the release of birth information to adopted people for the first time have been dropped.

Only a “small number” of State commemorations are planned over the next three years to continue the “decade of commemorations” marking the emergence of the Irish State, writes Tim O’Brien.

This is the last full week of the Dáil before Christmas.

Leaders’ Questions is up at noon followed by Questions on Promised Legislation at 12.32.

Government Business begins at 15.10 with the Patient Safety (Notifiable Patient Safety Incidents) Bill 2019. This legislation will establish a framework for mandatory open disclosure - the issue at the heart of the CervicalCheck controversy.

There will then be statements on racism affecting ethnic minorities in Ireland.

Topical issues will be taken at 17.15, before the Dáil adjourns just after 8pm.

There are commencement matters at 10.30 followed by the Order of Business an hour later.

There will then be statements regarding the appointment of a Sarcoma specialist at St Vincent’s University Hospital.

At 9.00, the Committee of Public Accounts will meet representatives from Pobal.

At the same time, the Select Committee on Members’ Interests of Dáil Éireann meets. It is likely this meeting will decide what action to take against a number of Fianna Fáil TDs who were caught up in the Dáil voting controversy.

At 9.30, the Joint Committee on Housing, Planning and Local Government will receive an update on the Government’s Rebuilding Ireland plan. It will hear from Minister for Housing Eoghan Murphy.

The Select Committee on Education and Skills meets at 10.30 with Minister for Education Joe McHugh.

At 11.00, the Joint Committee on Justice and Equality will unveil a report on Direct Provision and the International Protection Application Process. This report is likely to call for a “root and branch” review of the current direct provision system.

The Select Committee on Foreign Affairs and Trade, and Defence meets at 2pm.