It’s Election Day: If Johnson cannot win a majority, the future of Brexit could change 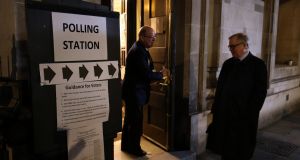 It’s Election Day. After a five-week campaign that saw Boris Johnson accused of wholesale dishonesty and callousness towards the victims of Conservative austerity, Jeremy Corbyn denounced as a threat to national security and indifferent to anti-Semitism and Jo Swinson sinking in public esteem to be the most unpopular of this unloved trio of leaders, polls opened across the United Kingdom at 7am.

They close at 10pm, when we can expect a long night as the results come in. My guide to watching it is here.

The weather is forecast to be woeful, with heavy rain almost everywhere, hail and sleet in Scotland and gale force winds in the west of England.

As I report today Johnson returned for his closing rally to the scene of the most trumpeted triumph of his tenure as London mayor, the 2012 Olympics. Much of the Copper Box Arena, which was the venue for handball and fencing, was cordoned off so that the hundreds of Tory activists brought in for the night looked like a bigger crowd.

Many held signs saying Get Brexit Done and - a little improbably for a party that has been in government for almost a decade - calling for more money for the NHS, schools and policing.

Warm-up speeches from James Cleverly, Michael Gove and Priti Patel focused less on the promise of another Conservative government than on the threat posed by Corbyn, with Gove working himself up into a trembling fury at the prospect of the Labour leader in Downing Street as the audience chanted “shame on him”.

Johnson also majored on the threat represented by Corbyn, warning that the contest was “tight, and getting tighter” as he urged supporters to fight for every vote until the polls close tonight.

A shock to the establishment?

An average of polls gives the Conservatives a nine-point lead over Labour but a ComRes poll for the Telegraph shows the gap at just five points, a margin that could deliver a hung parliament.

Labour had a better campaigning day yesterday after Tuesday’s embarrassing leak of shadow health secretary Jon Ashworth saying the party was going to lose and suggesting that Corbyn was a national security threat. Corbyn’s closing argument was an appeal to voters to deliver a shock to the establishment by putting Labour into office.

The most memorable moment of the day saw Johnson hiding in a giant fridge to avoid being interviewed by Piers Morgan on Good Morning Britain and the Guardian’s Marina Hyde captures it beautifully.

By tomorrow morning, Britain’s future could look very different if Johnson fails to win the majority he needs to form a government and take Britain out of the EU at the end of next month. Any alternative government that emerges from a hung parliament will seek to delay Brexit and put the decision to a second referendum later in the year. Polls over the last two years have shown a small but consistent majority for remaining in the EU.

Jennifer O’Connell on the role of tactical voting.

Newton Emerson says the DUP have the right to seek influence at Westminster.

The Irish Times view on the election.

My guide to watching the results tonight.

Gerry Moriarty on the count in Northern Ireland.