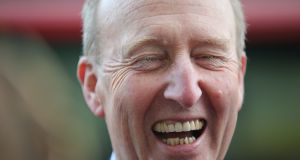 Minister for Transport Shane Ross: the manner in which judges are appointed has always been at the top of his political wishlist. Photograph: Nick Bradshaw

There were great scenes of celebration in the Upper House when the Judicial Appointments Commission Bill was approved, following the longest filibuster in Seanad history. After a 125-hour talkathon, the Government finally managed to get its wretched legislation through.

But the winning side wasn’t the one celebrating. The Bill’s vanquished opponents, led by lawyers Michael McDowell and Ivana Bacik with David Norris and Gerard Craughwell in support, were trumpeting their success in forcing a fantastic U-turn from the justice minister which they insist makes mincemeat of the Bill.

Getting it passed wasn’t easy.

The Government, reluctantly, had to smash the glass and break out the emergency guillotine, otherwise the opponents of Shane Ross’s pet project would still be talking.

Still, a win is a win. Minister Ross, aka Winston Churchtown, must have been ecstatic. He may be Minister for Transport, but the manner in which judges are appointed has always been at the top of his political wishlist. His evangelistic drive to push the measure through before the Government expires has been a major source of irritation to Cabinet colleagues.

At long last, at teatime on Wednesday, the talking stopped. The Winston Churchtown Memorial Bill was passed.

It now goes back to the Dáil to reconsider in light of the Seanad amendments, and that might not be the end of the matter, either. The legal rump in the lower house may push to have the Bill recommitted to committee stage, or if the Bill is passed there is a strong possibility it might be sent to the President for a test of its constitutionality.

The Law Library rump (shy, self-effacing) in the Oireachtas fancies its chances if that happens.

But for the moment, the Government is heaving a sigh of relief.

In the chamber, McDowell and co may have been forced into retreat but they put on a great show of claiming victory. Despite many months arguing against the Bill, they declared the result a triumph.

Not so much for them, and certainly not for Minister Ross, but for Charlie Flanagan, whom they thanked profusely. As Minister for Justice, poor Charlie Flanagan had to spend a year and a half taking care of the judicial baby Ross dumped in his lap before heading back to his own department to take care of his burgeoning brood of photo opportunities.

In introducing a set of Government amendments in the final lap, they say Charlie “was running up the white flag” and agreeing with their arguments that the legislation is unconstitutional.

Word that the Government had lost patience with the long-running Seanad saga began to circulate on Tuesday night after the Government lost votes on a couple of their amendments. When it was decided to guillotine the debate, independent senators were furiously lobbied by senior Government figures to come on side.

Jerry Buttimer, Fine Gael leader in the Seanad, trundled in the guillotine on Wednesday morning. The Bill’s opponents complained bitterly and an amendment by their leader Michael McDowell aimed at avoiding it was narrowly defeated. There were mutterings of “people being brought from their hospital beds” and deals being done and pairing agreements disregarded.

The end was nigh. But the soon-to-be-vanquished filibuster merchants saw no cloud. Instead, the outcome was one big silver lining for them.

This was down to amendment 24, introduced by Flanagan on behalf of the Government as “an important issue in the context of certain warnings from senators over the course of the last 125 hours as to the constitutionality or otherwise of the legislation.”

The clause was “a general saver” providing that the constitutional function of the Government in the appointment of judges is firmly upheld. “Nothing in this act should be construed as limiting the power of the Government in respect of the advice that they give to the President, with respect to the appointment by the President of a person to be a judge.”

In other words, the Government has the final say in judicial appointments.

“I ask the Minister to take a bow” cried McDowell, delighted with Charlie for “running up the white flag” and saving the Bill from its unconstitutionality.

“Any government, once this Bill becomes law, is free to say ‘Sorry, we’re making an appointment and we’re not involving the commission at all.’”

He wondered why they spent so long arguing about the matter when the legislation doesn’t end political input into judicial appointments, as Shane Ross claims. “The answer is that one man’s vanity had to be appeased.” It was all down to “Ross’s footstamping refusal to appoint judges” until his Bill was done. Not to mention forcing Flanagan to turn up in the Seanad for a year and a half.

The whole thing is “grotesque”.

Gerard Craughwell, clearly stung by some of the commentary, began by saying he is no lackey of Senator McDowell’s. He made up his own mind on the issue, having taken his own legal advice.

He praised Charlie, who looked like he just wanted to get out of the Seanad and forget about the Bill until after Christmas. He had kept his word and stood by the commitment made by the Government to Ross. “The tail that is wagging the dog had its own way and as a man of honour he decided to stand over the commitment that was given to the tail,” Craughwell said of the baffled Flanagan.

As for the Minister for Transport, who championed the Bill, “In years to come in political science classes, this will be a textbook case for students on how a Government can be manipulated by one man . . . there’s probably half a dozen PhDs to be earned out of this piece of legislation.”

Lawyer Ivana Bacik rowed in with a Star Wars reference, describing the amendment as a “a U-turn, a concession and an admission” that their arguments over constitutionality were valid. Charlie Flanagan had hit the “Star Wars general override button” she said.

“Minister Ross must be presumably horrified with it.”

But David Norris was the star turn. It was as if he was premiering a new one-man show as he lavishly congratulated the Minister and his amendment which does not limit Government power, as was Ross’s intention. “Well done. Congratulations!” he boomed.

“You’ve done a damn good job, Minister. You’ve filleted the Ross Bill. You destroyed it. You’ve left it in shreds and I would love to see Shane Ross’s face when this banana lands under his right foot – or hoof; under his right hoof.”

He was in fine form. “The commission is totally redundant. You know, it can be told to bugger off. Off you go, have your tea, play skittles, whatever you want.”

He was so glad the House got to address this amendment. “Nothing in this act shall be construed as limiting the power of the government.”

In other words, carolled Norris; “You can tell the commission to bugger off.”

The Chair admonished him for his language.

Charlie Flanagan hadn’t much to say. “”I merely wish to acknowledge the support of senators for this important amendment . . .”

And they all burst out laughing.

Winston’s ears must have been burning.