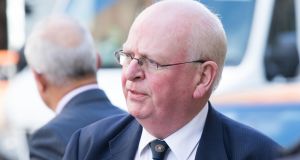 Senator Michael McDowell filibustered on the legislation which has been debated for almost 110 hours in the Seanad. Photograph: Tom Honan

Controversial legislation which has been the subject of one of the longest debates in living memory has been passed in the Seanad by 25 votes to 23.

But the Judicial Appointments Commission Bill to reform how judges are appointed has to return to the Dáil where it began, for debate on up to 60 amendments.

It will not be passed by Christmas and faces a major challenge to be completed in advance of the general election.

The hugely divisive Bill has been championed by Minister for Transport Shane Ross who wants to limit the role of politicians and the judiciary in the appointment of judges and wants to have a non-legal majority on the board that will appoint new judges.

It had been stalled in the Seanad for almost 18 months after a filibuster led by Independent Senator Michael McDowell who has repeatedly called elements of the legislation unconstitutional.

Mr McDowell claimed that the lengthy debate on the Bill of up to 125 hours was “entirely futile” because of an amendment passed in the Seanad without a vote on Wednesday under which the Government can “appoint who it wishes without any regard to the judicial appointments commission”.

He asked: “What have we been spending our time here for at all?”

Mr McDowell described the amendment as a “massive U-turn to try and save this Bill from a charge of unconstitutionality”.

The legislation was introduced so that “one man’s vanity has to be appeased” but the amendment showed the “redundancy” of the legislation because the Government could bypass the commission’s recommendations on appointments.

Mr Flanagan acknowledged that the commission might be bypassed. “That may well be the case – under our Constitution, it is absolutely essential.”

He added: “I very much reject allegations of cronyism on the part of anybody in the matter of the appointment of members of the judiciary.”

He said there had not been any undue interference in the process as had been alleged outside this House.

Mr Ross had sought the legislation because of his belief in alleged cronyism in judicial appointments.

The unexpected completion of the Bill in the Seanad follows a vote earlier in the day to put a deadline or guillotine on the legislation.

The Government defeated an opposition attempt to prevent the guillotine by 25 votes to 22 after support from Sinn Féin and Independents Lynn Ruane, Pádraig Ó Céidigh, John Dolan and Brian Ó Domhnaill.

The Government moved to guillotine the debate after two defeats on Tuesday when all Fine Gael Senators were absent when votes were called.

Ms Ruane said a guillotine might be an abuse of the Seanad “but it’s also an abuse for the past few months because of the time you’ve taken here given we could have been talking about different legislation,” she told Mr McDowell.

Labour Senator Ivana Bacik described the guillotine as “outrageous” and claimed it was a knee-jerk reaction by Mr Flanagan who is steering the legislation through the Oireachtas.

Seanad leader Jerry Buttimer said there that had been too much “hot air” in the debate which had been filibustered by the Opposition.