The Irish Times view on Brexit: coming to the crunch

Working out the future EU-UK relationship will take much negotiation, most likely over a period of years 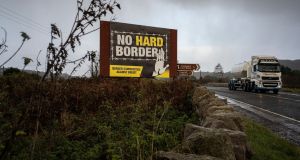 The Government here is correct to insist the avoidance of controls and checks at the Irish Border, but also has a part to play in ensuring that the new arrangements work. Photograph: Paulo Nunes dos Santos/The New York Times

The course Brexit will take will depend on the outcome of Thursday’s UK general election. If the Conservatives gain a majority, then we must assume that the House of Commons will pass the withdrawal agreement and Brexit will happen at the end of January. Brexit will, thus be “done” in that the UK will have left the EU, but working out the future relationship of the two sides will still take much negotiation, most likely over a period of years.

The position of Northern Ireland will remain a sensitive and important issue. The late change to the draft withdrawal agreement sets out a new framework which would leave the North aligned to some rules of the EU single market, but remaining in the UK’s customs territory.

Although the outline of this has been agreed, negotiations are needed on how it will operate in practice. And this, in turn, will be significantly influenced by the nature of the future trading relationship between the two sides – the key focus of high level talks if Brexit happens.

The two sets of negotiations are linked. If, as the Conservatives say, the UK wants a harder Brexit, then the new trading regime for the North will be both more complicated to work operationally and also more important.

The more the UK diverges from EU rules, the greater the reassurance the EU will need that this is all working properly. On the flip-side, were the UK to head towards a softer form of Brexit, implementing the arrangements for the North would be easier.

Worryingly, these two sets of negotiations are due to be completed by the end of the transition period in December 2020 – which looks most unlikely to happen. Unless the UK agrees to extend this – and Boris Johnson has said that if elected he won’t do so – then more uncertainty lies ahead.

This goes beyond technicalities. It is a hugely sensitive issue in the North both politically and for business. The North’s businesses do have some advantages from the proposed regime – notably access to both the British and EU markets – but also face additional costs and bureaucracy in trading with Britain. Meanwhile, any trade barriers – or implementation of a different regime to the rest of the UK – are opposed by the DUP and its supporters.

These concerns should not be dismissed summarily in the Republic. The Government here is correct to insist on the avoidance of controls and checks at the Irish Border, but also has a part to play in ensuring that the new arrangements work.

The wider issue is that if they do not operate properly, pressure could reappear at some stage for controls at the Border, or at Irish ports as goods move to Continental EU markets. Even if the withdrawal agreement passes, there is much work to be done.