Ireland is in ‘dark place’ on Covid-19 and full Level 5 lockdown may be imminent, Harris says 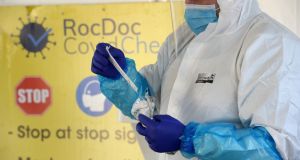 A Government Minister has said an exponential rise in hospital admissions with Covid-19, the presence of a new coronavirus variant in Ireland, and a tripling in the number of referrals for Covid-testing strongly suggest a return to a full Level 5 lockdown is imminent.

Minister for Higher Education Simon Harris said that the State – like many other countries – found itself in a “dark and worrying place” in relation to Covid-19 right now.

He was speaking shortly after Ministers were notified a Cabinet meeting has been hastily arranged for Wednesday afternoon, to discuss the deteriorating situation as regards the Covid-19 pandemic. The indications are that the Government is likely to reintroduce closures of non-essential retail; reimpose 5km travel restrictions, and bring forward by two days the rule prohibiting more than one household to gather in a home or garden.

Mr Harris said that given the evidence of exponential growth across a number of indicators in recent days, he “would not be surprised” if there were 2,000 new Covid-19 cases a day by New Year’s Day, as had been predicted by Tánaiste Leo Varadkar before Christmas.

He said that HSE chief executive Paul Reid had said that 10 per cent of those being tested are now showing as positive for Covid-19.

Mr Harris also noted comments from GPs on Tuesday that they have referred 70,000 patients for Covid testing in the fourth week of December compared with a figure of 25,000 in the first week of December.

“On top of all that, we know this new variant is here in Ireland. We have seen the impact it has had in the UK. Anything that is more transmissible and is easier to pass on is a sign of worry,” he added.

Mr Harris said that the new information, as well as the latest advice from chief medical officer (CMO) Dr Tony Holohan, would be discussed at the Cabinet meeting, but he suggested that an extra layer of restrictions was inevitable.

Mr Harris said some people had questioned the point of harsher lockdowns in the past and had asked the Government what was the point of having them if future lockdowns were going to happen.

“This time it’s [a lockdown is] justified,” he said. “This time we have a clear answer. Vaccines get us out of this mess. We have to do everything we can to slow it [Covid-19] down. There will be a Cabinet meeting tomorrow afternoon. The Taoiseach [Micheál Martin] has rightly called that and it will give us a chance to assess all of the evidence.

“Be in no doubt, nobody needs a Cabinet meeting or a Government decision to tell us what we need to do. The advice of the CMO is very, very clear. If at all possible, stay at home.”

Mr Harris said New Year’s Eve parties were a “no no”, even in outside settings.

“The CMO’s advice is good enough for me. He has very clearly said to us, the people of Ireland, reduce your social contacts, stay at home, and keep yourself to yourself.”

He said the Taoiseach was going to update his colleagues on the latest medical advice.

“We are now dealing with a new variant, discovered very recently. It’s a big risk. One of the reasons is it spreads much easier, can make more people sick and put more people into hospital.

“We do not want to fall on the final hurdle.”

Mr O’Brien said on Tuesday that keeping schools closed had not come up at the t Cabinet meeting on Monday evening.

“Construction remains open and all ancillary services. Most importantly for our kids and young adults, our schools will remain open and they have done and we have been able to do that, thankfully successfully with very few outbreaks which in itself is very important,” Mr O’Brien told reporters on Tuesday.

Mr Harris pointed to a number of positive factors in the effort against Covid-19, including the first use of the new Pfizer vaccine in the Republic. He also said there were 973 vacant beds in Irish hospitals and ICUs were not near capacity. He did warn that unless numbers were contained, health services could find themselves under increasing pressure.

The Minister was speaking a day after Dr Holohan said the “concerning trend” of increasing hospital admissions reflected the “sharp increase” in the rates of Covid-19 seen in the last 10 days. “We have now exceeded the cumulative number of people hospitalised in this third wave than in the second. Hospitalisations have increased sharply in the last two days,” he said.