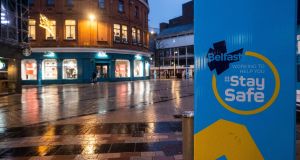 Near empty streets and a ‘stay safe’ sign are seen on Arthur Street in Belfast on Monday. Photograph: PA

Northern Ireland recorded its highest daily total of Covid-19 cases since the pandemic began on Tuesday, with more than 1,500 people testing positive for the virus.

The North’s Department of Health (DoH) said 1,566 people had been confirmed to have coronavirus between 10am on Monday and 10am on Tuesday.

It is the highest number of positive tests reported in the North in a single day.

The figures reported daily by the Department may include samples taken over several days, and there may have been additional reporting delays because of the Christmas holidays.

The Department also reported the deaths of an additional 14 people, bringing the total number of fatalities to 1,305.

According to data published on the department’s dashboard, which was updated on Tuesday afternoon for the first time since December 22nd, a total of 51 deaths were recorded between 10am on December 23rd and 10am on December 28th.

The highest rate of infection is in the Derry City and Strabane District Council area, which between December 22nd and 28th had an infection rate of 410.8 per 100,000 of population.

A total of 5,686 cases of the virus have been confirmed in the North in the last seven days, with the greatest number - 852 - in Belfast, followed by 703 in Armagh City, Banbridge and Craigavon and 619 in Derry and Strabane.

Three of the North’s hospitals were operating at over capacity on Tuesday, according to the department, with the overall hospital network at 98 per cent occupancy.

A total of 462 people with Covid-19 were receiving hospital treatment, with 34 in intensive care.