Government aims for 25,000 new homes to be built next year 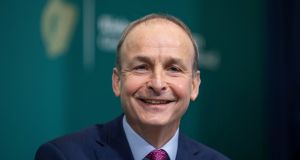 Taoiseach Micheál Martin says while the number of homeless people has fallen, the numbers have not fallen enough. Photograph: Julien Behal Photography/PA

Taoiseach Micheál Martin has set a target of 25,000 new homes to be built in the State next year.

The Taoiseach said close to 18,000 new homes had been built in the State during 2020 despite the interruptions to the construction industry and wider society caused by Covid-19.

“We would like to get to 25,000 houses in 2021; it will be challenging, but that is the target,” he told journalists at a round-table interview.

Successive governments have failed to meet their own targets for annual new builds every year since housing was identified as a priority issue in 2014.

Mr Martin said increased budgets in addition to a more focused approach would help the Government reach its own projections for the first time.

“We have pledged around €3.3 billion for housing in 2021. The key issue will be capacity to deliver to get the houses built. Covid has impacted in the first wave because in the first lockdown, construction shut down and that has impacted housebuilding,” he said.

He also said the Government and Minister for Housing Darragh O’Brien had committed to build 12,750 social homes next year, of which 9,750 would be directly built by approved housing bodies or local authorities.

He said that while the number of homeless people had fallen, the numbers had not fallen enough.

Mr Martin said the approval prior to Christmas of the Land Development Agency Bill as well as the housing affordability plan would both be weapons in the Government armoury in tackling housing challenges. He hoped both would pass through the Oireachtas and become law by spring.

He also said refurbishment work had been completed on the majority of 2,500 local authority “voids” (unoccupied units).

“Every morning when I wake up I say ‘What are my key priorities? Housing, health, climate change in addition to Covid and education’,” he said.

He also said that once the Covid-19 pandemic had run its course, there would be challenges with an increase in population and greater demand for housing. The Economic and Social Research Institute (ESRI) had projected a need for 33,000 new homes each year to meet growing demand.

“My worry is about getting to the 33,000 figure which the ESRI has said is necessary to put a dent into the waiting lists. I’m not happy yet that we are where we should be and I think we’ll keep driving it on,” the Taoiseach said.

On homelessness, he said: “I think numbers are coming down but we want to keep that down. Some 6,000 people exited homelessness last year, so people are exiting.

“What we want to concentrate on [is] getting more people out of homelessness. And I think that’s realisable. I think homelessness is now at its lowest rate since 2016,” he said.

A previous government, elected in 2011, had promised that homelessness would have become a thing of the past by 2016. In fact, the number of homeless people began to rise during those years.