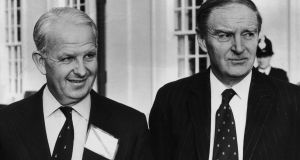 A secret legal committee set up by the 1973 coalition government produced draft amendments to remove the State’s territorial claims to the island of Ireland in the Constitution.

Highly sensitive Government papers from the era kept under lock and key for almost half a century have now been made available for public viewing by the National Archive.

The Fine Gael-Labour government and taoiseach Liam Cosgrave strongly supported the Sunningdale Agreement, which proposed a devolved and power-sharing executive for Northern Ireland, not dissimilar to the institutions that emerged after the Belfast Agreement.

However, Cosgrave and others believed that in order for the Irish government to participate in the proposed Council for Ireland, the territorial claim to the North would have to be dropped. There was a legal question as to whether a Council for Ireland was in keeping with article 2 which stated “the national territory consists of the whole island of Ireland, its islands and the territorial seas”.

There was also a political impetus where Cosgrave and several of his Fine Gael colleagues were of the view that the article needed to be removed so as to allay the concerns of moderate unionists – represented by unionist leader Brian Faulkner – that the Irish government was using Sunningdale as a stepping stone to a united Ireland.

In the file, the government sets out “our position” which states: “We should seek to meet the minimal requirements of responsible Northern Protestant opinion.”

The committee, known simply as the Legal Committee, was set up in June 1973, a little over three months after the government came to power. The seven-person committee was chaired by attorney general Declan Costello (who was then a sitting Fine Gael TD) and included lawyers from his and other government departments, from the chief state solicitor’s office, as well as a senior official from the Department of Justice.

The legal committee explored how the cross-Border Council of Ireland which would include TDs and Irish ministers – which would act as consultants to the new executive in the North – could be established in accordance with the law.

In its report, which it produced within weeks, it looked at the possibility of the council being set up within the ambit of the 1937 Constitution. In that scenario, it concluded one possible path was if the Irish government “accepted” the de facto situation in Northern Ireland without giving formal recognition to its validity. However, while a political declaration would not be open to challenge, any enabling legislation to give effect to Sunningdale would be.

Most of the report is focused on amendments to article 2 and article 3 of the Constitution that would effectively remove the potency of the territorial claim.

The draft article 2 proposed by the committee of lawyers chaired by Costello read: “This Constitution recognises the constant desire for the restoration of the unity of Ireland manifest in the history of its people now re-affirmed.

“The Constitution also recognises that those who share the common name of Irishmen comprise different elements all of which contribute to Irish life and culture and each of these elements has the right to purse its legitimate ends by peaceful means.”

In the event, the referendum was never pursued by the coalition. Cosgrave told Faulkner that the “time was not ripe”. In a High Court case brought by Kevin Boland challenging Sunningdale, Cosgrave argued the government had never formally recognised the validity of the North.

In January 1974, Labour Party minister for posts and telegraphs Conor Cruise O’Brien argued for a new constitution. He claimed article 2 and article 3 were “a most serious threat to the political survival of the Faulkner unionists, and hence to the whole fabric of the Sunningdale arrangements”.

Fianna Fáil, the main opposition party, and its leader, Jack Lynch, had refused to countenance any change to the territorial claims. Cruise O’Brien said that because public opinion favoured Sunningdale, “Fianna Fáil fighting against [a new Constitution] would come more and more to look like a party tied to the past, and unwilling to respond to the real needs of the present.”

“It would fight the election in the repellent company of both wings of Sinn Féin and the IRA, and Blaneyites.”

In a separate letter to attorney general Costello, he said: “I don’t belong to the society for the preservation of Jack Lynch and I think that if we are going to preserve anybody it ought to be Brian Faulkner without whom there seems to be no future for Sunningdale. We pushed him hard, too hard, I think, on the Council of Ireland and I think it is now up to us to demonstrate, as we can do, by constitutional change, that the council does not have sinister implications that so many unionists have seen in it.”