‘A momentous day’: Annie Lynch (79) first person to get Covid-19 vaccine in State

Head of vaccine task force says by August, anyone who wants vaccine, will have it 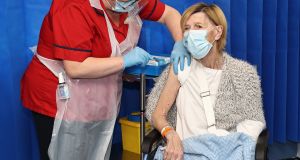 Dublin grandmother Annie Lynch (79) became the first person in the Republic to receive the coronavirus vaccine on Tuesday afternoon.

Ms Lynch, who grew up in the Liberties, received the vaccine just before 1.30pm in St James’s Hospital, Dublin.

Her husband John Lynch died in September, and she has three children and six grandchildren and two great grandchildren. Ms Lynch lives in Drimnagh, and is a resident of the Mercer’s Institute for Successful Ageing in St James’s Hospital.

Speaking on Tuesday, Ms Lynch said she felt “very privileged to be the first person in Ireland to receive the vaccine.”

“Like everyone else, I have been waiting for the vaccine and I really feel like there is a bit of hope there now. It’s brilliant that it’s here,” she said.

Before she received the jab Ms Lynch was given a HSE vaccine information leaflet, and a detailed leaflet from the drug manufacturer. “Everything was explained very clearly to me beforehand,” she said.

After she received the dose she was given a vaccine report card which listed the name and batch of the vaccine she had been given.

Speaking after receiving the vaccine she told nurse Deborah Cross she “didn’t feel a thing,” before giving those looking on a thumbs up to a round of applause.

Bernie Waterhouse, a clinical nurse manager on a Covid-19 ward in St James’s Hospital became the first healthcare worker to receive the vaccine.

“I wanted to get the vaccine to protect myself, and the people I work with and care for every day, from Covid-19,” she said.

Commenting on the news, Minister for Health Stephen Donnelly said today was a “ray of light after what has been a trying year in our country.”

“As we know, the vaccines will be delivered in stages - we’re starting in acute hospitals initially, and will move into long-term care facilities from next week, but this is a great start to an historic process,” he said.

Dr Colm Henry, HSE chief clinical officer, said the vaccine would be a “source of great relief and hope,” particularly for older generations, who had to “endure the consequences of social restrictions more than other groups in society.”

Mary Day, St James’s Hospital chief executive, said it was very proud to be the first to offer the vaccine.

Earlier, Prof Brian MacCraith, head of the vaccine task force, told RTÉ Radio’s Morning Ireland that “this is a momentous day. It is the beginning of a complex process, the beginning of the end of an awful period,”

Currently there are just under 10,000 doses of the two-step Pfizer-BioNtech vaccine in the country. Some 30,000 more are due to arrive today.

Two doses of the vaccine are required for every person, so 10,000 doses are required to vaccinate 5,000 people.

This will be followed by 40,000 doses a week throughout January and early February. The plan is to vaccinate 20,000 people a week from early January, with this increasing to 40,000 over the month and into February.

Prof MacCraith explained the reason half the doses that arrived in the country on December 26th had been held back was to ensure health authorities have sufficient quantities to administer the required second dose.

This was a precaution and once supply chains, manufacturing schedules and delivery dates have been confirmed “we will never hold back the vaccine,” he said.

There had been some difficulties around the supply of the vaccine in other countries that explained the caution, he said. “We want to get to a situation where we can use the 40,000 doses as soon as possible,” he said.

Prof MacCraith said when the AstraZeneca vaccine becomes available it will be “a game changer” because it does not have to be stored at super low temperatures.

He expects that by August anyone who wanted the vaccine would have it.

A recent poll had indicated more than 70 per cent of the population would be prepared to take the vaccine, with only one in ten saying they would not.

A communications campaign to provide reassurance and address concerns would play an important role in the coming months, he said.

The first phase of the rollout will focus on frontline healthcare workers and older people in long-term residential care settings, such as nursing homes.

The plan to vaccinate more than 580 nursing homes will start on January 11th, but some vaccinations in care homes will take place the week beforehand.

It is expected to take until the end of February to administer two doses of the vaccine to the 70,000 residents and staff in the vulnerable sector.

Initially the vaccination of those in nursing homes will be undertaken by 180 community healthcare vaccinators.

The HSE has said a further 1,500 vaccinators are to become available in the acute hospital system as the rollout plan picks up pace.

The second phase of the vaccine rollout will include doses being administered to cohorts of the general public, according to priority group, by general practitioners and pharmacists, and in mass-vaccination centres.

The indications are that Moderna’s vaccine, which is also complex to administer, may be approved as early as January 6th. There will be upwards of 300,000 doses delivered to the State before the end of February - more than enough to immunise the entire nursing home sector.

This will be followed by people working in education; those aged 55-64; workers in other occupations important to the functioning of society; people aged between 18 and 54; and, finally, pregnant women and those under 18.