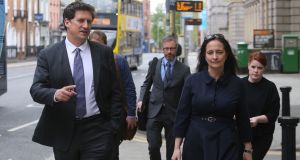 A policy proposal that would see Ireland’s carbon emissions reduce by an average of just under 6.5 per cent a year has been rejected by the Green Party in government formation talks.

The Greens are adamant that their red line of an average annual reduction of 7 per cent in carbon emissions to 2030 must be met.

It is understood that a mix of policies that would see an average reduction of just under 6.5 per cent has been tabled, with sources suggesting it primarily came from Fine Gael.

It is understood that a number of policies in the agriculture area, which could affect the livestock industry, would push the policy mix tabled by the larger parties towards the Greens’ 7 per cent goal.

Green Party leader Eamon Ryan is said to be pushing for exact detail on how the 7 per cent target can be met. Some sections of the Greens already believe that an annual average emissions target by 2030 is insufficient and that there should instead be a 7 per cent year-on-year decrease.

The Greens are insisting that measures to reach the target cannot be backloaded until the end of the decade.

The party has also called for the halting of the construction of fossil fuel infrastructure, including the planned liquefied natural gas (LNG) plant earmarked for the Shannon estuary area.

This is seen as equally important as the 7 per cent target, but a view has taken hold in the party that Fianna Fáil and Fine Gael are backsliding on previous commitments in the area. Land use, such as the rewetting of bogs, is also said to be a sticking point.

Sources in the larger two parties said the Greens were getting significant wins in the areas of transport infrastructure which they could point to as helping to tackle climate change. Transport and housing policy have yet to be signed off.

Ms Martin, who will challenge Mr Ryan for leadership of the Greens, is said by others in the talks to be among the most hardline on the Green side, along with finance spokeswoman Neasa Hourigan. Dublin West TD Roderic O’Gorman, who is close to Mr Ryan, has also in recent days been hardline as the Greens seek to pin down their main policy goals. Sources close to Ms Martin said “she desperately wants to get a deal she can support”.

Several other members of the Green parliamentary party, who spoke privately, said the focus was to try to secure the best possible deal by Friday. Most said the leadership was a secondary consideration at this moment in time.

“The most important thing now is if we get to Friday and get a good agreement and there is no major split, we can take it from there by putting it to the membership,” said one TD involved in the process.

The other two parties were also surprised that during the plenary session yesterday the Greens brought up the issue of medicinal cannabis and suggested provisions to allow its use should be included in the programme for government. The suggestion was rejected.

It is hoped that a deal can be finalised by the end of the week. A sitting of the Dáil on Thursday next week has been cancelled, with the time set to be used by Fianna Fáil, Fine Gael and the Greens to sell a deal, if one is agreed, to their party memberships.