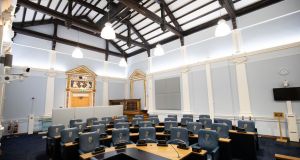 The Seanad chamber. The current Government has interpreted the shortage of 11 Senators to mean the Seanad is in abeyance until a new administration is formed. Photograph: Tom Honan

A group of Senators will apply to the High Court for a judgment about whether the Seanad can operate without all 60 members unless the Taoiseach agrees a date for the recently-elected Upper House to sit.

The 10 Senators have written to Leo Varadkar stating they will seek a court judgment on the Labour Party’s legal advice that it is constitutional for the 49 elected Seanad members to meet, debate and pass legislation unless he considers himself “constitutionally free” to agree that it can sit without the 11 nominees who are appointed by the Taoiseach.

The current Government has interpreted the shortage of 11 Senators to mean the Seanad is in abeyance until a new administration is formed, and therefore no further legislation can be passed because the Seanad does not have its full 60-seat complement.

Legislation must be passed by both Dáil and Seanad to be enacted. Mr Varadkar is not empowered to nominate the 11 appointees as it can only be done by the Taoiseach of the incoming government.

In the letter sent on Friday, the five Labour Senators and five Independent Senators state: “It is our understanding and belief that in the present situation the elected members of the Seanad can meet and legislate, and that the Oireachtas, as our national parliament, exists as a whole and is not debarred from functioning constitutionally as a legislature by the delay in the Dáil’s nomination of a Taoiseach or the delay in nomination of a further 11 Senators.”

They note that “it has widely been reported that you have been advised to the contrary”.

Led by Labour Seanad leader Ivana Bacik and Independent Michael McDowell, the letter writers say: “We intend to apply to the High Court for a speedy, authoritative and binding determination by way of declaration on this important issue of constitutional interpretation unless it is clarified that you share our understanding on this issue and consider yourself constitutionally free to advise the President to fix a day for the first meeting of the newly-elected Seanad in early course.

“Unless we receive this clarification it would be our intention to issue and serve a plenary summons and deliver a short statement of claim seeking the appropriate declaration, naming you as defendant and making the Attorney General a notice party.”

The move comes as Fine Gael, Fianna Fáil and the Green Party are under pressure to reach a deal on government formation and have a new administration in place before the end of June, when sections of emergency anti-terrorist and anti-crime legislation are set to lapse.

Sections of the Offences against the State Act and the Criminal Justice Amendment Act 2009 are renewed each year by the end of June through a motion of both the Dáil and the Seanad. If the laws are not renewed by June 30th, then non-jury trials for paramilitary and crime gang offences will not be allowed. A number of provisions related to evidence in such trials will also lapse.