Agreement unlikely without interventions from the three party leaders of Fianna Fáil, Fine Gael and the Greens 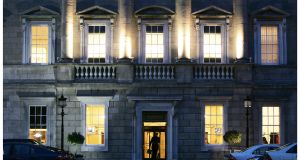 Sources in all three parties agree the talks on forming a coalition government must reach a decisive stage this week. Photograph: Alan Betson / The Irish Times

Talks on forming a government were continuing on Monday night with senior figures in all three parties involved admitting privately that the coming days represent a “do-or-die” stage in the long-running negotiations.

There was no sense among insiders that sufficient progress was yet being made between the negotiating teams to conclude an agreement before the end of the week.

Sources say there is unlikely to be a deal without interventions from the three party leaders of Fianna Fáil, Fine Gael and the Greens to agree key aspects of the programme for government.

But there are divisions emerging in the Green Party over the talks which could jeopardise the chances of any deal being ratified by the party’s membership, where it requires a two-thirds majority.

Party sources on both sides acknowledge the emerging split, even as Fine Gael and Fianna Fáil put pressure the Greens to conclude the negotiations and produce a draft programme for government this week.

While party leader Eamon Ryan is said to be keen to reach an agreement, a group including deputy leader Catherine Martin and finance spokeswoman Neasa Hourigan are much more reluctant, and are believed to be concerned Mr Ryan will concede ground in talks with the other leaders.

Ms Martin has told colleagues she is committed to securing a deal that can be passed by the members and will force a tougher bargain than Mr Ryan, but many senior Fine Gael and Fianna Fáil figures close to the negotiations are sceptical she would accept any agreement.

They point to the announcement by Ms Martin over the weekend that she will challenge Mr Ryan for the leadership of the Green Party.

Ms Martin, the Greens’ lead negotiator in the talks, has also told people she will evaluate any final deal before deciding whether to support it or not.

A number of issues have not been agreed by negotiators but have instead been “kicked upstairs” to be thrashed out by the leaders – arriving at compromises some senior Greens say are not acceptable to them.

Ms Martin on Monday night met the deputy leaders of Fine Gael and Fianna Fáil, Simon Coveney and Dara Calleary, after a day of working on documents. Outstanding issues include the future of the proposed liquefied natural gas (LNG) terminal on the Shannon estuary, agriculture, housing, transport and the proposed 7 per cent reduction in greenhouse gas emissions.

Sources in all three parties agree the talks on forming a coalition government must reach a decisive stage this week. With an estimated two weeks needed to secure ratification of any agreement by the members of the three parties, a conclusion of the negotiations this week would leave only a few days for the Dáil to elect a new taoiseach, for a government to be formed and for the Dáil and Seanad to pass votes renewing the Offences Against the State Act before the end of June.

The Government’s legal advice – though this is contested by some lawyers – is that the Seanad is not properly constituted until a new taoiseach makes his 11 nominations to the Upper House. Without the renewal of the Offences Against the State Act, certain anti-terrorist and anti-gangland powers will lapse, including those authorising the Special Criminal Court to conduct non-jury trials.

While Government sources speak about a “plan B” if a government is not formed, senior legal sources say challenges to trials in that court are “certain” if the Oireachtas does not pass the votes, or if an incomplete Seanad votes on the Act.

Minister for Climate Action Richard Bruton described the issues yet to be resolved in the negotiations as “a fairly short and manageable list”, adding that he believes that all parties involved were of this view.

“We are all working to a deadline that we want to complete it this week. I think that’s a realistic deadline.”

1 Shops, hairdressers and hotels expected to reopen next week as Level 5 restrictions are eased
2 Almost 15% of Irish adults have been raped, study finds
3 Eir to issue apology for poor customer relations service
4 Covid-19 response: Has Level 5 been worth the cost?
5 Covid-19: Museums, cinemas set to reopen next week as Varadkar warns of New Year restrictions
Real news has value SUBSCRIBE