After unnecessarily long talks, the Greens will decide if any coalition deal will stand or fall 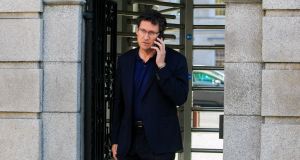 Decision time, folks. In the coming days, the leaders of Fine Gael, Fianna Fáil and the Green Party, and the negotiators acting for them, must decide if they are going to put their names to a document that will map out the next five years for the country under a coalition government, and ask their members to endorse it. Legislative deadlines – for the Offences Against the State Act, and some of the Covid supports – are fast running out. Time to poop, grimaces one insider, or get off the potty. He didn’t really say poop.

The process has already taken an unnecessarily long time. Partly this is because the three parties needed time to get used to the idea; fair enough. But they didn’t need four months. There has been a lot of play-acting by various quarters. Fine Gael’s circulation of a document about its prospects of success in a mid-August (!) election was this week’s most egregious example. Fine Gael does have some of its leading politicians running interference on the talks; rather more skilfully, so does Sinn Féin. But each of the parties has its share of agitators against a deal.

Does the Green Party accept less than what it wants (but more than it could ever have got before) in the emerging agreement, or does it seek an alternative government?

The leaders of Fianna Fáil and Fine Gael, I think, now want to conclude a deal and will probably make the compromises necessary to do so in the coming days, despite continuing Fianna Fáil suspicions of Leo Varadkar. The leader of the Green Party also wants to, but cannot be sure of carrying either his negotiating team, or his party as a whole by a sufficient margin. It is most likely in the Green Party that the deal will stand or fall.

The issues are complex, but the political choice for the Greens, essentially, is a simple one: does the party accept less than what it wants (but more than it could ever have got before) in the emerging agreement, or does it seek an alternative government, either before or after another election, in which it might win greater policy concessions?

The prospect of an alternative has been knocking around some quarters in Leinster House of late. If the talks collapse, it goes, Sinn Féin and the Social Democrats would approach the Greens, and offer them whatever they wanted, whatever Fianna Fáil and Fine Gael refused to concede. With the Greens on board, the three parties would then approach Fianna Fáil, invite it to dump its leader and sign up to the new SF-SD-Green programme for government.

These are certainly unprecedented times, but I don’t think that this is grounded in reality. If the talks collapse, there are two other outcomes which are far more likely: a national political crisis with an eventual second general election, or a Fine Gael-Fianna Fáil-Independent government.

There is a very good chance that this is the best offer the Greens will get for the foreseeable future; but Green members don’t need any further lectures. They can make up their own minds.

For some in the party, it is a question of whether they are principally an environmentally- and climate action-focused party, or a party devoted to a broader left-wing, “social justice”, agenda; green, or red-green? It is true that the successful Green parties of Europe have tended to be pragmatically Green-first; but for many people, these turbulent times have the promise of great political change. Either way, that is a choice for the Irish Greens to make now.

For many in the party, it will be finely balanced decision, coming come down a question of whether such a novel coalition could actually deliver on its programme for government. At some level, it will come down to decision about trusting the two bigger parties will keep their promises. Forming any coalition government requires the participants to trust their partners, and that is always a leap for them. If they do, they would be wise to adopt the old Russian proverb, popularised in nuclear disarmament negotiations by Ronald Reagan: trust, but verify.

I am not sure that this week’s flirting with the Independents and promising them constituency goodies to support the government will do much to build trust with the Greens.

Fianna Fáil and Fine Gael are doing this partly to put pressure on the Greens, partly to give themselves an insurance policy in case the Greens walk. At one level, this should alarm the Greens, demonstrating that Fianna Fáil and Fine Gael are the same as they ever were, willing to pay for power with preference and patronage. At another level, though, it could be oddly reassuring: if they do a deal to get into power, they’re likely to want to stick with it. Remember the old Texas definition of an honest politician: when he’s bought, he stays bought. It might as well be the Greens securing a new climate action and environmental policy, as the Healy-Raes delivering the Ballinskelligs bypass.

(No doubt the details of any concessions to the Independents will be published by Government Buildings. Micheál Martin was certainly fond of calling for that when he was in opposition)

It’s a long way from all this to the escalating conflagration of Donald Trump’s presidency, which compelling spectacle entered a new phase this week. But the grotesquerie of Trump in the United States should warn us what happens when politicians don’t make politics work.

The great fear – well-grounded – is that Trump will refuse to accept a defeat in the November presidential election.

Democratic politics requires people to accept the results of elections and work with them to form a government. Failure to agree a government in the coming days would be a dreadful indictment of the parties that have taken the task upon themselves to the exclusion of others. I expect they would all pay a price if it falls apart now.

1 Taoiseach urges British people not to holiday in Ireland at present
2 Dublin has crowd-free weekend as pubs long for July 20th restart
3 Anne Enright: ‘Nuala O’Faolain was an impossible person, to whom we owe so much’
4 Keith Duggan: Bubba Wallace tweet shows just how troubled Donald Trump’s mind is
5 Off the charts: why this paint colour is Instagram's favourite
Real news has value SUBSCRIBE