Q&A: What are the sticking points in Government formation talks? 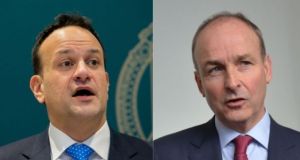 Fianna Fáil has committed to reducing the State pension age from the proposed 67 years of age to 65 years of age. Fine Gael has opposed this change. Photographs: Gareth Chaney/Collins & Alan Betson/The Irish Times

Taoiseach Leo Varadkar struck a note of optimism last Friday when he predicted that agreement could be reached between Fine Gael, Fianna Fáil and the Greens on a programme for government. However, progress at the talks has been fitful and over the weekend the parties failed to resolve some key issues.

With negotiators discussing the key issue of agriculture on Monday, talks insiders now say it might take much longer to reach a consensus.

“We’ve got a lot of sticky issues to deal with over the next week or so,” said Green TD Joe O’Brien. “Having an agreement by the end of the week is a target, it’s probably an optimistic target from my point of view,” he said.

So what are the major sticking points to emerge so far?

There is a fundamental divide here between Fine Gael and Fianna Fáil on the one hand, and the Greens on the other. The two larger parties say the deficit that will arise from Covid-19 will need to be addressed and reduced. They are talking of dates in 2022 and the beginning of 2023 for this process to accelerate.

During sessions on Friday and Saturday, the Greens opposed this saying it will lead to a repeat of the austerity measures of a decade ago. For its part, the party has argued for borrowing to continue (at very low rates) until the economy has sufficiently recovered. The two other parties say the deficit would become unmanageable, that it would pose risks, including reputational risks. Has there been movement? Joe O’Brien said on RTÉ’s The Week in Politics that the deficit would have to be addressed at some stage. Fine Gael and Fianna Fáil interpreted it as such.

It’s one of the Green’s 17 items on its “wish list”. Its members identify it as a really high priority. It has argued strongly for the system to be scrapped, without success so far.

Fianna Fáil is now concerned about Sinn Féin and wants to reestablish its republican credentials. It has argued very strongly for a dedicated unit in the Department of an Taoiseach on the reunification for Ireland. The other two parties don’t fully share its enthusiasm.

This has become a pinch point. All three parties agree with an increase in the carbon tax to at least €80 a tonne by the end of the decade. But there has been differences in how the funds raised should be used. Fianna Fáil wants them to be hypothecated - in other words ring-fenced for mitigation measures. Principally it wants a just transition fund to help Bord na Móna workers in the Midlands find alternative green careers. The Greens have argued for a dividend system which they argue will best protect the least well off in society.

All parties agree that it should increase to 0.7 per cent of national product but have differed on timescales and on flexibilities (something Fine Gael has argued for).

This Bill was passed by the last Dáil and supported by the Greens and Fianna Fáíl. Fine Gael oppose banning Israeli products made in the Occupied Territories on the basis of legal advice which says it would contravene EU law.

One of the issues that won Sinn Féin the election. Fianna Fáil has committed to reducing the State pension age from the proposed 67 years of age to 65 years of age. Fine Gael has opposed this change.

A host of unresolved issues here. There are some 60 roads projects at various stages of development and Fine Gael say most cannot be halted at this stage. The Greens want to put a stop to them. They have also argued for 20 per cent of the capital transport budget be earmarked for cycling and walking. The other two parties oppose such a large slice of the transport budget to be diverted to uses which they consider minority.

This relates to all the major infrastructure that will be build over the next 20 years, including roads, transport, housing, water, utilities, climate mitigation, energy and power. The Greens want it reviewed – not by the new government but by the Oireachtas. They believe Fianna Fáil and Fine Gael interests will be an influence on this.

This is being discussed on Monday and has the potential to cause a major divide. Inherent in the Green manifesto are radical changes in agricultural practices involving reductions in stock numbers - there is no getting away from it. Fine Gael and Fianna Fáil have put forward proposals more reliant on technology and work changes, but as of now, they will not produce major reductions in the biggest sectoral emitter in Ireland. The two bigger parties have also suggested that other departments cut more emissions to allow agriculture cut less. So far, that has not been acceptable to the Greens.

The strange and unexpected pinchpoint

It came during the discussions on defence last week when Fianna Fáíl spokesman on climate change (and formerly of defence) Jack Chambers made a spirited argument for the reestablishment of the 4th Western Brigade headquarters at Custume Barracks in Athlone. It led to him and Tánaiste Simon Coveney have a very involved and intense exchange.