Election manifestos from February based on a world now ‘completely changed’, warns Minister 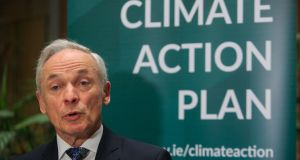 Minister for Communications, Climate Action and Environment Richard Bruton: ‘It has taken time to get an understanding of what’s possible, and even that is still uncertain.’ Photograph: Gareth Chaney/Collins

The issues yet to be resolved in the negotiations on a programme for government is “a fairly short and manageable list”, the Minister for Climate Action Richard Bruton has said, adding that he believes that all parties were of this view.

“We are all working to a deadline that we want to complete it this week. I think that’s a realistic deadline,” Mr Bruton told reporters at Government Buildings.

However, he warned that party manifestos drawn up for the February election was based on a world that had now “completely changed”.

“It has taken time to get an understanding of what’s possible, and even that is still uncertain,” he said.

“This is difficult for the parties and it has taken time. But I think we have now got to the point where we have a good understanding of the different parties’ positions and it is workable to find solutions. But fo course I can’t guarantee that it will land where we all hope, but there is a belief that this deadline is achievable,” he said.

Mr Bruton said that the Greens’ requirement for a seven per cent annual reduction ini greenhouse gas emissions - regarded as an absolute red line for the party - was “clearly an ambitious target - but I understand why we need to have ambitious targets in this area”.

He said that he hoped the negotiations would “set the signposts” for how the reductions could be achieved.

Mr Bruton was speaking with the Minister for Business Heather Humpreys at the launch of further supports for businesses to assist their online services.

The leaders of Fine Gael, Fianna Fáil and the Green Party met for four hours on Sunday in an attempt to resolve major outstanding issues which included disagreements around how and when to reduce the country’s deficit and an impasse over the planned increase in the pension age.

Sources on Sunday night said that there was “movement” on the pension issue with Fianna Fáil figures saying there was “optimism” around their demand to keep the pension age at 66.

It is understood that Fine Gael are also insisting on guarantees that income tax and USC will not go up and will also demand a “July jobs” initiative to stimulate job creation and help out sectors like tourism and retail. Well-placed sources said the talks were successful and leaders now believe they can see the “landing zone” on almost all of the major sticking points.

In a statement after the meeting, the parties said they “had a constructive meeting and made progress with many outstanding issues. “All parties will continue the talks tomorrow.”

The three parties reached broad agreement over the weekend in areas such as communications, energy, social protection, health and retrofitting. They are also near agreement on the issues of transport and infrastructure, with sources in the Green Party admitting that roads projects which are already in process are likely to proceed, leaving less money for cycling and walking budgets