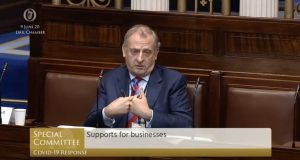 Screengrab from Oireachtas TV of Neil McDonnell, chief executive of Isme, who claimed in the Dáil that a senior trade union official and a senior civil servant have accused small business owners of “fiddling their expenses”. Screengrab: Oireachtas TV/PA Wire

Chief executive of Isme Neil McDonnell told the committee that Department of Finance officials had told him that “the lower tax credit available to the self-employed and the USC surcharge imposed on high-income self-employed are justified by their ability to fiddle expenses”.

Addressing the committee, which is dealing with the State’s response to the pandemic and supports for business, Mr McDonnell said his organisation had persistently asked officials and in pre-budget submissions “can you please justify this”, telling the committee it was “baseless”.

Questioned by Sinn Féin TD David Cullinane, Mr McDonnell said he had been told this by senior Department of Finance officials.

When asked whether that level of seniority was at the very top of the department, he said it was a “bit lower”.

Mr Cullinane said that if that was the case, “I have a big difficulty with that”. He said he was disheartened to hear it and if it was in fact the case that Department of Finance officials said it, it was “fundamentally wrong” for them to do so.

The Isme chief had said that State agencies and industrial policy are fixated on the foreign multinational corporation sector and they “leave little doubt of their perception that big business is good, small business is bad”.

Mr McDonnell said many of the missteps with the pandemic unemployment payment (Pup), the temporary wage subsidy scheme (TWSS), and other issues “could all have been avoided if there was a formal liaison between Government and small businesses. Unfortunately, SMEs continue to be a blind-spot for Government.”

Earlier, chief executive of business representative group Ibec, Danny McCoy, said it was necessary to fully reopen the economy to establish the level of damage done to different sectors during the last three months.

Chairman of the Covid-19 committee, Michael McNamara, had asked how long would it take for customer practices to reverse in a situation where all economic activity “was driven into the hands of multinationals” such as Tesco, Lidl and Aldi, which paid their taxes outside Ireland, rather than smaller shops during the pandemic.

Mr McCoy said he did not know the answer to this, but that “without reopening we’re in a completely artificial test period”.

He said Ireland was “remarkably quick” to get liquidity to businesses and employees into households.

That was done directly through the pandemic payment and the temporary wage subsidy scheme, and it was important to keep the “stay-at-home message”.The capacity in the UK to get liquidity to employees was very slow.

He told Independent TD Matt Shanahan that “what really matters here is when we open up, will the scale of the liquidity measures match the required need?”

Mr McCoy had also called for the replacement of the two-metre social distancing measure with a one-metre one, the removal of quarantine restrictions and an “extensive and systematic Covid-19 track-and-trace programme”.

He said new ways had to be found to support businesses that were “not ratable” and did not qualify for grants and other assistance, and “we need to find more innovative ways of dealing with those who are more mobile in employment situations”.

The main difficulty is in the public realm and how public space and creches and schools which is where advice is needed, “rather than in the workplace”, Mr McCoy added.

He said they knew the reduction in social distancing was not coming now, but businesses needed clarity on when the reduction would happen to allow them to plan ahead.