New government deal ‘not the change that people voted for’, says Doherty 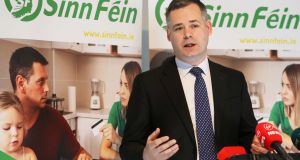 The proposed deal between Fine Gael, Fianna Fáil and the Green Party will result in the “largest centre-right government” Ireland has seen in recent times, Sinn Féin has said.

Furthermore if the Green Party membership endorses the programme for government it will do “significant damage to the environmental movement”, opposition parties have said.

Sinn Féin deputy leader Pearse Doherty said the deal is “not the change that people voted for.”

“These parties, Fine Gael and Fianna Fáil specifically, cannot be trusted. They created many of the major challenges we have in terms of health and housing. Regardless of what party props them up, these two parties will not change. So it is over to the membership now. They have seen what these parties have failed to deliver despite all their flowery language and I think it would be naive in the extreme to think they will change into what the public wanted.”

Mr Doherty said his party would “wait and see” as to how the membership of each party votes but that Sinn Féin will attempt to form a government again if it does not pass.

“I’m sure many within the Green Party who have seen the huge mandate for change recognise that this is not it. People know that it is in the DNA of Fianna Fáil and Fine Gael to protect the developer, landlord, speculator, the insurance industry and we have countless examples of that.”

He said that if the deal passes, Sinn Féin will “use the mandate we have to force the changes that are needed.”

If the deal fails to get past the membership the party will renew contacts with other like-minded parties, Mr Doherty said on Sunday.

“We have stayed in contact with everyone including in fairness the Green Party who never excluded us. We want to lead the next government, deal with the climate emergency, and reduce the pension age, all of these things.

“I have huge respect for the Green Party and I believe that of course they know they are going in with two centre-right parties, parties who together have created the housing crisis. The under-investment in health did not fall from the sky.”

“The crises that we have in our society aren’t acts of god, they are man-made. The Greens know the consequences of government and the alternatives. It is up to them to decide what is in their interests and what is in the interests of the people who elected them. If this deal goes ahead, it will be the largest centre-right Government in recent times.”

Rise TD for Dublin South West Paul Murphy said that “if the Greens’ membership endorses this deal, they will do significant damage to the environmental movement, allowing themselves to be used as a green mudguard for austerity. That is epitomised by the carbon tax, which will not even be a ‘cap and dividend’ model previously advocated by the Greens, with rebates for lower income families. Instead, it will be a straightforward austerity tax.”

1 Garda detective charged with making death threats against ex-partner
2 How fraudsters used lockdown to lure Irish victims into boats and caravans scam
3 Miriam Lord: Minister for Agriculture tries to get himself out of the manure
4 Coronavirus: One more death and 24 new cases reported in the Republic
5 Martin criticises ‘over-focus’ on Border poll ahead of Foster meeting
Real news has value SUBSCRIBE