Explainer: Is winning a seat on UN Security Council a big deal for Ireland? 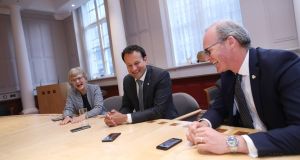 From left; Minister for Children and Youth Affairs Katherine Zappone, Taoiseach Leo Varadkar and Tánaiste and Minister for Foreign Affairs Simon Coveney, react as it was confirmed that Ireland had secured a seat on the United Nations Security Council. Photograph: Julien Behal Photography

Why is winning a seat on the United Nations Security Council a big deal?

The 15-member UN Security Council is the most powerful body in the UN system. In terms of global diplomacy, there is no higher platform where a country can influence international affairs.

It is primarily responsible for maintaining international peace and security. The council determines when and where a UN peace operation is deployed.

It has the power to make decisions that member states are obliged to adopt, though permanent members of the council, notably Russia, have used their veto powers to block resolutions made by the council, which has weakened it.

So Ireland is getting to play international diplomacy with the big countries?

Yes. There are five permanent members of the council: China, France, Russia, the United Kingdom and the United States.

Ten non-permanent members are elected by the UN General Assembly for two-year terms.

Ireland and Norway won the two seats in their regional group on Wednesday, edging out Canada in a three-horse race.

Ireland will hold the monthly presidency of the council at least once during its term in office as it is rotated alphabetically among the membership, so this will be a high profile role for Ireland’s ambassador at the UN, Geraldine Byrne Nason, and whoever the new Minister for Foreign Affairs is in the next government.

What swung it for the Irish bid?

It is hard to say because the vote is a secret ballot. The Irish campaign, hung on a theme of “Empathy, Partnership and Independence”, played up Ireland’s status as a small nation being able to sit at the table with the big nations and represent the small countries at the 193-nation forum.

Ireland’s history of famine, emigration and conflict resolution along with the Irish commitment to multilateralism and long contribution to UN peacekeeping (since 1958) will no doubt have helped.

Hard to say. The U2 singer’s appeal as a humanitarian certainly did not hurt Ireland’s bid if the crowd of UN ambassadors that swarmed around him and former Irish president Mary Robinson when they helped launch Ireland’s bid in New York in the summer of 2018 is to be judged.

Has Ireland held a temporary seat on the council before?

Did it make a difference then?

Yes. Ireland’s then ambassador to the UN Richard Ryan held the month-long presidency of the UN Security Council in October 2001 when the US started bombing targets in Afghanistan in response to the September 11th terror attacks.

Mr Ryan had to work diplomatic channels to bring the US into the Security Council and encourage the neo-conservative foreign policy hawks in the George W Bush administration to use the inner sanctum of the UN which it had avoided because of potential entanglement with permanent members China and Russia over its military actions.

How much has membership of the council cost and will it cost?

The Government spent €840,000 on the campaign to win a seat over a three-year period - about half what the Norwegians and Canadians spent on their campaigns.

A further €2 million has been budgeted by the Government for the two years Ireland is on the council from the start of 2021.

Is it worth it?

Critics have dismissed the value of membership with former Irish Times diplomatic correspondent Wesley Boyd describing it as an “expensive vanity trip.”

This has been rejected by Government officials, diplomats and others who see the role on the council as bringing respect and influence to a small country on one of the highest international stages.

As one of only three European Union members on the council, it will also help Ireland’s standing at a European level.

Could our membership cause tensions with other countries?

Quite possibly. Ireland will be joining the council at a critical time as multilateral institutions like the UN are under threat from the rise of nationalism and the increasing power of dictators and authoritarian countries.

The council will over the coming years face difficult decisions on escalating international tensions between large powers, climate change and humanitarian crises as the impact of the Covid-19 pandemic will affect some of the poorest countries on the planet.