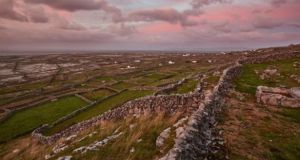 Inishmaan: farmers on the island are putting cattle on boats and bringing them to Mayo. Photograph: Andy Haslam/New York Times

Cattle on the Aran Islands have been shipped to Co Mayo because of severe water and fodder shortages due to the dry weather, the Oireachtas Covid-19 committee has heard.

Restrictions are so severe that the taps are on for only two hours a day. In some cases, supplies only arrive in from the mainland late in the evening and water is switched off after 30 minutes.

Sinn Féin TD Mairéad Farrell said these conditions “don’t conform to the health guidelines” set out by the National Public Health Emergency Team (NPHET) and “I don’t think it would happen in the city”.

She said the pressure on farmers because of the drought was such that on Inishmaan they were “putting cattle on boats and bringing them to Mayo, which costs a lot” and the water shortages happened every year.

Concerns were also raised about the date for the reopening of the islands in the midst of the pandemic and the preparations for easing of restrictions.

TDs sought certainty around a date and called for additional support packages for island communities to avoid businesses on islands being pressured into opening at the same time as the rest of the country.

Minister of State for the Gaeltacht Seán Kyne said “this is very difficult business about when to reopen the islands”.

He pointed to a survey done on the smallest of the Aran Islands, Inisheer, where 92 per cent did not want travel restrictions eased until August.

The Minister was speaking as the committee debated the Government’s response to the pandemic and its impact on the Gaeltacht, Irish language and island communities.

In the Government’s original roadmap for easing the lockdown, the islands of the Irish coast were scheduled to reopen for business, predominantly tourism, in August.

Fianna Fáil TD Éamon Ó Cuív said when the dates were brought forward by the Government – reducing the reopening phases from five to four – “no announcement whatsoever was made in relation to the islands and this has sparked an intense debate within the islands themselves”.

Acknowledging the uncertainty, Mr Kyne said “when NPHET removed phase five there was no mention of the islands”.

The Minister said he had made proposals about the timing of the reopening to NPHET which was considering the issue and “that advice will come to the Government”.

Independent TD Catherine Connolly said it could not be exaggerated how worried people were on the three Aran Islands and Inishbofin about a “premature opening of the islands”.

Ms Connolly said that what had been exposed from the coronavirus pandemic was “the absence of any policy” or legislative framework for island communities.

The Minister told TDs that because of the limited interaction with other communities the threat of the virus had been reduced. He said supports for the islands included measures such as the online voucher trading scheme which offered funds to help companies improve their websites.

But Sinn Féin TD Aengus Ó Snodaigh said that was available for every company in the State and the department needed to do more for Údarás na Gaeltachta, the Gaeltacht authority.

Independent TD Michael Collins, who represents islands off the southwest coast, said there were no public toilets on any of the islands and he called for the department to supply them as it was a major public health issue for reopening the islands.