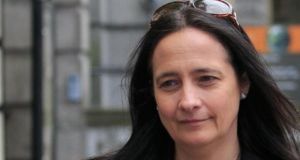 Catherine Martin: “We must put the country first and never let it be said that we did not at times do all in our power to protect the planet.” Photograph: Gareth Chaney

Green Party deputy leader Catherine Martin has strongly endorsed the programme for government at the party’s special conference, saying the agreement is “the best green deal in the history of the country”.

In the opening address where she highlighted the achievements of the party in the document, she also pointed out its shortcomings and said no party member should look at it through “rose-tinted glasses”.

She said she had decided to vote Yes because she believed that in government the “Greens would have the greatest potential to make real change.”

Her speech was seen as pivotal in the internal debate within the party. Her strong support for going into government will be seen as an important boon for those who have backed the programme, given that she initially opposed going into coalition with Fianna Fáil and Fine Gael.

Outlining the ‘wins’ in the document, she said she was particularly pleased about the reorientation of the transport budget; a ban on gas exploration on fracked gas; a referendum on housing; measures tackling poverty and inequality in education; exclusion zones around medical facilities; and the ending of direct provision.

“Throughout the document there are significant green traits to shape a greater future in terms of the environment.

“I am satisfied that the deal negotiated was the best achievable and at its heart many worthwhile (Green principles),” she said.

However, she continued: “As a card-carrying Green Party member there are some losses and we should not look at it through rose tinted glasses.

“Many will be disappointed that more concessions on animal welfare, agriculture and housing were not achieved. Our concerns about the Development Agency remain substantial and real.”

In in a gesture to those who are concerned about the programme, she said: “I understand if you cannot take this leap with me today but to the undecided amongst you I still hold out hope that you can give this a chance because you are needed now like never before.”

Ms Martin referred several times to the seismic setback of the Covid-19 emergency, as well as the 130 days since the general election. She said the country needed a stable government.

“It is a risk, a huge risk but one I am prepared to take, we must put the country first and never let it be said that we did not at times do all in our power to protect the planet,”she said.

Ms Martin told the online conference, for which 2,300 people registered, that she was acutely conscious it was a time of deep political and economic uncertainty for the future of the planet, for people and for quality of life.

She said there were never going to be outright winners nor could there be.

“As you would expect the document is a compromise. It is a blend of what is important to us but also to Fianna Fáil and Fine Gael.

“We pushed hard on climate justice, social justice and equality,” she said.

Ms Martin said she was conscious of what happened to the Green Party in the 2007 but added it was incumbent on the party in government to ensure that all of the terms laid out were fulfilled and that the Greens worked hard to ensure that other items were included in the government agenda.

Earlier it was reported that the three Green Party TDs who abstained on the vote on the programme for government will all oppose the party going into a coalition with Fine Gael and Fianna Fáil during today’s special convention.

However, in an early indication that the membership may be swaying in favour of the programme for government, some 68 per cent of the 237 members who applied for speaking time on Thursday will speak in favour of coalition deal, while 32 per cent will speak against.

The agenda of the meeting, which was published this morning, shows that the three TDs who abstained; Neasa Hourigan, Patrick Costello and Francis Noel Duffy, will speak against entering coalition during the online meeting.

The conference began at 1pm with the five members of the negotiating team each talking through their respective areas.

The debate proper will begin at 4pm. Among those speaking in favour of coalition will be TD, Joe Brien, MEP Grace O’Sullivan, and Senator Pauline O’Reilly.

Separately, a Fine Gael councillor who is a close political associate of Minister for Finance Paschal Donohoe has said he opposes the coalition agreement with Fianna Fáil and the Greens.

Ray McAdam, a councillor in Mr Donohoe’s constituency of Dublin Central, said he cannot support such a coalition arrangement.