Changes to farming a sticking point in government talks 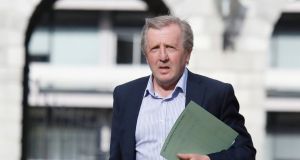 Talks will continue on the formation of a government on Thursday with progress reported on several issues on Wednesday, but no sign yet of a decisive breakthrough.

Sources now fear the talks could run into the weekend, despite the belief in all parties that this week represented a final deadline to reach agreement.

One source reported significant progress on Wednesday with agreement on a text covering a number of policy areas in a proposed programme for government, but added that this was on less contentious issues.

The role of agriculture in reducing greenhouse gas emissions remains a key sticking point, with divisions between the Green Party and Fine Gael on the issue demonstrated on Wednesday when Green leader Eamon Ryan and Minister for Agriculture Michael Creed clashed during a Dáil debate.

Sources said all parties knew the “landing zone” for agreement is for average annual reductions to be about 7 per cent, but that there would not be complete clarity about how that would achieved in the later years of a five-year term.

One Green source acknowledged it would not be possible to have a detailed roadmap for the reductions in emissions every year, and the Minister for Climate Action Richard Bruton referenced the example in the Dáil of Denmark – a country specifically identified as a role model in the Green manifesto.

“The reality is that we will probably end up in a position like Denmark, which has committed to high ambition but cannot specify all of the pathway,” he said. “That is the reality we will have to follow.”

If negotiating teams and the deputy leaders agree the bulk of a text on Thursday or Friday, the remaining issues will be “kicked upstairs” to the party leaders to agree.

Fine Gael and Fianna Fáil doubt that Green deputy leader Catherine Martin will agree a final text approved by the leaders, but Ms Martin has told her party she wants to get a deal that will gain the two-thirds support it needs among Green members.

Meanwhile, Rise TD Paul Murphy sought to stoke Green Party fears that it will be attacked from the left after a deal. Mr Murphy said the Greens would be a “mudguard” for “neo-liberal and austerity policies” if they agree to share power.

He said the Greens will be blamed for every “austerity” measure under the guise of it being “about the environment”.

Mr Ryan said he “fundamentally disagrees” with claims his party will be bad for farmers, as Mr Creed accused him of doing a “disservice” to farmers over their efforts on biodiversity.

Mr Creed said the Green leader did a disservice to the “enormous efforts of farmers”. The Minister said “the world did not begin on February 9th [when 12 Green TDs were elected] or any time recently on all of this”.

Meanwhile, Sinn Féin finance spokesman Pearse Doherty said he has been in touch with Mr Ryan to tell him that his party still wants to form a government and will attempt to do so if the current talks are unsuccessful.

“We’ve made sure we have been in contact over the last number of days,” Mr Doherty said. “We have reassured people we want to be part of a government for change.”

“It is important that the Greens know there are other options.”