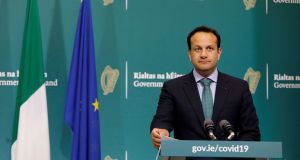 In a letter sent to the National Bus and Rail Union Taoiseach Leo Varadkar said the next government would want to review the Ireland 2040 capital development plan. Photograph: Photocall Ireland/PA Wire

Ministers will this week seek Dáil approval to spend an additional €6.8 billion on social welfare this year, but the Government will face opposition to its plans to reduce the €350 per week Covid-19 unemployment payment for those who were previously earning less than that amount.

The move comes as alarm grows in Government about the costs of the pandemic and a review of the scheme found that more than 200,000 people - mostly part-time workers - were better off on the scheme than when working. Some employers said this was creating a disincentive to returning to work.

Government plans to taper these payments are likely to become entangled with the requirement for a Dáil vote, which must happen in the coming week to authorise overall spending on special welfare programmes.

The proposals to reduce the €350 payment are set to be resisted by Sinn Féin, Labour and others. The Green Party was unable to say last night if it would support the move. Fianna Fáil favours tapering the payment.

Labour TD Ged Nash said “cutting the basic income of thousands of workers when large parts of the economy are shut, with no alternative for them to go back to work, would be wrong”.

The Irish Times has also learned that Taoiseach Leo Varadkar wants to protect the Dublin Metro project and the controversial Bus Connects plan in any review of future spending plans by a new government.

In a letter sent to the National Bus and Rail Union (NBRU), Mr Varadkar said the next government would want to review the Ireland 2040 capital development plan. He said he did not want to abandon the planned €4 billion metro or €2 billion Bus Connects projects earmarked for Dublin.

Mr Varadkar said as part of the review of the capital plan, “consideration will be given to further investment in cycling and pedestrian infrastructure, the Navan-Dunboyne rail line, investment in electric and hydrogen-fuelled buses among other suggestions”. He said he was very keen that the “long overdue” electrification of rail lines into Dublin would be advanced.

The Green Party has made investment in public transport a priority in the government formation talks.

Fianna Fáil leader Micheal Martin told the NBRU in a letter that serious consideration must be given to establishing rapid bus transit corridors in cities, particularly along established and popular routes.

He said this kind of dedicated system could provide considerable passenger capacity, often on a par with light rail lines, but could be developed at a lesser cost and at a faster pace.

He said the State’s housing and transport crises were tightly intertwined and “the reality is that investment will be needed to bring better transport links to affordable homes”.

1 Coronavirus: Parents of new babies to get three extra weeks’ leave
2 US passengers fly into Dublin: ‘I’m here for six days. I guess I’ll have to stay inside’
3 People with foreign accents should not be ‘assumed’ tourists - NPHET
4 Covid-19: 200 to 250 people arriving in Ireland from US daily - Coveney
5 California shuts down again as US coronavirus cases surge
Real news has value SUBSCRIBE