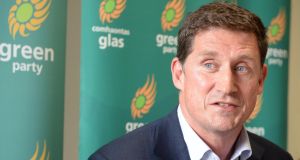 The Green Party has said it has no discussions, either within the party or with Fine Gael or Fianna Fáil, on the appointment of the next attorney general.

The party issued a statement in response to Sunday newspaper reports that it would seek to have barrister Roderick Maguire appointed to the role if it formed a government with Fianna Fáil and Fine Gael in the coming weeks.

“The Green Party would like to clarify that no names have been put forward by the party for the role of attorney general in any potential coalition government,” the statement said. “The party has not discussed possible appointments either internally or with other parties at any level.”

The statement came after social media comment about the reports, which centred on Mr Maguire’s reported advocacy for a No vote in the 2017 abortion referendum.

Dublin Central TD Neasa Hourigan, a member of the Green Party team involved in government formation talks, said such an appointment, were it to be made, would not be acceptable to her.

“With the greatest respect to this member, I have never heard his name. Appointments are decided by the leaders not the core negotiating team. The attorney general is an incredibly important role – as an active Repeal campaigner, this would not be an acceptable appointment to me,” she said on Twitter.

Efforts to contact Mr Maguire and Ms Hourigan on Sunday were unsuccessful.

Senior Fianna Fáil and Fine Gael figures played down the prospects of a Green nominee for the position of attorney general.

The Green Party declined to comment on reports that it would also seek the office of tánaiste and three cabinet posts if entering government. However, Fine Gael and Fianna Fáil sources were dismissive of any Green bid for the tánaiste’s office, with the expectation that the office would be beefed up and first held by Leo Varadkar if the talks conclude successfully. Fianna Fáil’s Micheál Martin would take the taoiseach’s office in such an arrangement with the two parties switching places in the government’s third year.

Political sources say the Greens are likely to seek and secure cabinet posts with responsibility for climate change, and a new, enlarged department responsible for housing, local government, transport and planning.

The three party leaders are understood to have met last Friday to review the talks, which they believe are progressing well. Negotiations will resume on Monday, with a plenary session involving all the participants, and a module on health policy.

With the election having taken place almost four months ago, there is growing impatience to bring the process to a conclusion among figures in Fianna Fáil and Fine Gael. Some senior civil servants are also understood to have privately urged the politicians to reach an agreement.

There is a series of Dáil votes required in the coming weeks on financial measures relating to social welfare payments, and the Dáil and Seanad must vote by June 30th to continue the legislation underpinning the Special Criminal Court.

Fianna Fáil and Fine Gael are likely to renew contacts with Independent TDs this week with a view to securing their support for a three-party coalition – and to provide some insurance that a government can be formed if the talks with the Green Party collapse. Wexford Independent TD Verona Murphy said she had contact with chief Fine Gael negotiator Simon Coveney on Friday.

Meanwhile, Fine Gael and Fianna Fáil TDs warned on Sunday that the delay in forming a government could mean that a long-awaited review of the local property tax could be shelved for another year. Fianna Fáil finance spokesman Michael McGrath and Fine Gael TD Colm Brophy, who chaired a review of the tax by the Dáil’s Budget Oversight Committee, told the Business Post they hoped it could be reformed this year. However, legislation would be needed to pass through the Dáil before the summer recess if the rates of the tax, unchanged since 2013, were to be altered.