Senator Ned O’Sullivan says they should ‘cop on and grow up’ as he expresses ’absolute shock at shenanigans in Lower House. Video: Oireachtas TV 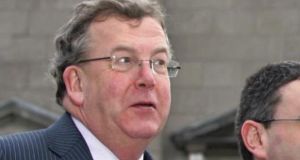 A Government Senator has hit out at the left wing parties protesting in the Dáil last night over speaking rights and described them as a “pack of rowdy undergraduates”. Photograph: Eric Luke.

A Government Senator has hit out at the left wing parties protesting in the Dáil last night over speaking rights and described them as a “pack of rowdy undergraduates”.

Fianna Fáil Senator Ned O’Sullivan said he was “absolutely shocked, as I think was the nation, by the shenanigans” in the Lower House.

“There is no gagging of democracy in these Houses and anybody who says so is only fooling themselves,” he said.

“Some of those people on the extreme left are doing this nation a disservice by hyping up all talk about gagging of democracy,” he said.

And he said they “should cop on and grow up”.

The Kerry Senator was reacting to chaotic scenes in the Dáil on Thursday night during a row over rights to prime speaking slots during debates.

Small political parties and Independent groups claimed the changes would allow the Government to remove them from the early stages of debates and effectively “muzzle” them.

The Government sought the changes to give their backbench TDs better speaking slots.

During the heated debate Rise TD Paul Murphy and People Before Profit TD Richard Boyd Barrett repeatedly refused to resume their seats. The House was suspended twice in the chaos and disorder.

Mr Murphy said the changes were an attempt to marginalise smaller parties in a bid by Government to dominate parliamentary debate and procedures.

But Mr O’Sullivan said “the system that was put in place doesn’t suit a minority”.

“They still have as far as I can see about 65 per cent or 70 per cent of speaking time.”

“Because they didn’t get their way they chose to behave like a pack of rowdy undergraduates.”

“We had the travesty last night of a person appointed a teller for a vote refusing to sign the result of the vote because it didn’t suit him,” he said in reference to Mr Murphy’s failure to sign.

The left-wing parties had “tried their street politics. We listened to them every week outside,” Mr O’Sullivan said. And “they’re trying it now in the Lower House. Thankfully no one has tried it here yet.”

The Listowel Senator added: “They’ve nothing to say about abuses in Trotskyite regimes whether it’s Russia or China or Korea but if anything happens in any of the European democracies they’re giving out yards.”

He acknowledged: “I’m having a bit of a rant but I think I represent common sense on this one and I would appeal to those undergraduates to cop on and grow up.”

Independent Senator Alice Mary Higgins warned of the need to be “extremely cautious of anything that moves us even one inch towards the idea of Government without parliament or the idea of winner takes all politics”.

Ms Higgins said a “diversity of voices is crucial” as she criticised the Government’s changes.

“The decision to row back to Civil War era 1920s politics in terms of who gets to speak in the Dáil chamber was a regretful step,” she said.

The changed speaking arrangements have been criticised by the Opposition as going back to what was in place in the 1920s.

The Seanad has been described as much more collegiate in its operations and Ms Higgins said it was important “that we really in this House endeavour to keep that constructive form of politics moving forward”.

Independent Senator Victor Boyhan warned Government politicians of the dangers of making changes when they might find themselves in opposition again soon.

“Don’t forget where you came from,” he said. “You’re in Government for the moment but who’s to say in six months’ time you’ll be back on the hustings arguing some other different story.”