Need to swear before God in court removed but TDs concern about banks, vulture funds 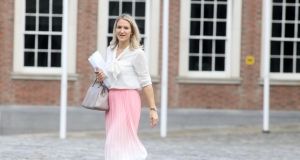 Minister for Justice Helen McEntee has rejected claims that legislation to reform the courts will allow vulture funds and banks get summary judgments against property owners on the basis of hearsay evidence.

Ms McEntee insisted a provision included in the Bill was not something “brought in in the dead of night or to benefit vulture funds”. And she said “it will not hinder anybody in ensuring that justice is served”.

The Minster was speaking as she introduced the Civil Law and Criminal Law (Miscellaneous) Bill, which includes temporary and longer-term reforms to assist the courts service to deal with challenges arising from the Covid-19 pandemic.

These include provision for more court cases to take place through video conferencing; electronic filing of documents as an alternative to affidavits; and the provision of additional coroners including more than one coroner in a district for up to six months in the event of a catastrophic incident or other mass fatality occurrence.

It also ends the requirement for witnesses in court to swear before God or make an affirmation when filing affidavits. Instead they can make a “statement of truth”.

TDs welcomed many of the provisions in the legislation but questioned the inclusion of a measure they claimed could be abused for the benefit of banks and vulture funds.

Sinn Féin TD Martin Kenny warned that evidence considered hearsay under current law would become admissible and taken as “live evidence”. He said “it could then be used to have a repossession order placed against a homeowner or business”.

Mr O’Callaghan said the measure represented a “significant change to the law” which “could have consequences beyond which all of us intend” and he called for it to be given more consideration.

Independent TD Mattie McGrath claimed the provision was “designed for vulture funds by their well-paid legal advisers to remove any protections for people from vulture funds”.

Mr Kenny called for a sunset clause on the legislation for November 9th. His move was supported by Social Democrats TD Catherine Murphy.

She said “it is highly unusual that every speaker drew attention to the same issue. How can that fall on deaf ears?”

Ms McEntee rejected the sunset clause but said she could report to the Dáil after 12 months.

She pledged to monitor the situation carefully and took on board the points TDs had made. The Minister said that if what they said would happen did happen she would respond. “I assure the House I will address that.”

The Minister said the provisions of the Bill “are absolutely vital to ensure that our systems can function at as close to full capacity as possible while addressing the very significant challenges we face during Covid-19”.