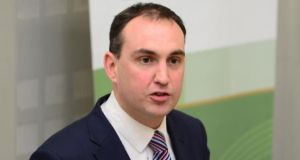 Fianna Fáil TD Marc MacSharry alleged State employees were opportunistic in using the crisis ‘to do nothing’. File photograph: The Irish Times

Taoiseach Micheál Martin has said he does not agree with party colleague Marc MacSharry’s comments accusing public servants of using the Covid-19 crisis as an excuse to “lie on the couch and watch box sets”.

Mr Martin said he believed the public servants had been “flat out” in his own department. Moreover, he added that there had been a “superb response” from those working in the public sector across the board.

During a Dáil debate on the Covid-19 pandemic unemployment payment on Tuesday night, Mr MacSharry alleged State employees were opportunistic in using the crisis “to do nothing”.

The Fianna Fáil TD said he had “dealings” recently with one State agency “where no one will be back in that office until the end of August”. They are working from home and “you have to talk to an answering machine”.

In a radio interview on Thursday, Mr MacSharry repeated his controversial remarks. He said people should not have to put up with “mediocrity dressed up as efficiency”.

Another party colleague has also criticised Mr MacSharry’s remarks. Fianna Fail Senator Fiona O’Loughlin said in the Seanad that she wanted to “disassociate” herself from the remarks. “He was completely wrong to say what he did.” Sinn Féin Senator Paul Gavan paid tribute to Oireachtas staff for “enabling us to operate the way we do in a week when some dreadful remarks were made about our public servants”.

Meanwhile, Ireland’s largest trade union has called on Mr MacSharry to apologise and withdraw his remarks .

Siptu said its members have expressed “anger, disappointment and hurt” at Mr MacSharry’s comments, which they have described as “outrageous”.

“However, given the volume of emails, phone calls and messages from members over the last 24 hours since the deputy repeated his outrageous comments we believe we must give public expression to the level of anger, disappointment and hurt felt by public service workers working across the country,” he said.

Mr King added that the comments “clearly demonstrate a fundamental lack of appreciation and understanding of the efforts” made by public servants throughout the coronavirus pandemic.

“Our members are demanding Deputy MacSharry listens to the advice of his parliamentary colleagues in Fianna Fáil and other parties – withdraws his comments, apologises and puts an end to this kind of misleading rhetoric.”