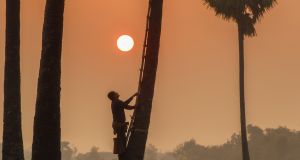 No palm tree left unclimbed: Like a Fianna Fáil politician seeking the last vote up a mountain boreen, diplomats canvassed every remote corner of the oceans from the Comoros to Vanuatu. Photograph: Getty Images/iStockphoto

The trigger has been pulled and the tortuous journey has begun. The diplomatic corps has been reshuffled. Experienced ambassadors have been assigned to key positions. Ireland is ready for the encounter. No, not the Brexit negotiations. We are embarking on an expensive vanity trip.

Ireland is once again seeking a seat on the Security Council of the United Nations. Why? “To ensure that the voice of small but influential nations such as Ireland can be heard and have an impact on world affairs,” says the Minister for Foreign Affairs and Trade, Charles Flanagan.

Hands up anyone who can name at least two of the bunch of temporary members currently having 'an impact on world affairs'. Well, one then?

The United Nations was established in 1945 at the end of the second World War in the hope of preventing multi-nation conflict. There are 15 members of the Security Council. Five of them – the United States, the Russian Federation, the United Kingdom, France and China – have permanent seats and the right to exercise the infamous veto. The other 10 seats rotate among member states by means of election.

Hands up anyone who can name at least two of the bunch of temporary members currently having “an impact on world affairs”. Well, one then? For the enlightenment of millions they are: Bolivia, Egypt, Ethiopia, Italy, Japan, Kazakhstan, Senegal, Sweden, Ukraine and Uruguay. Ireland has been elected for the two-year term previously in 1962, 1981 and 2001.

The last election came as a result of years of lobbying by the diplomatic service. It was hailed by the then minister for foreign affairs Brian Cowen as a major achievement for Irish diplomacy and recognition of the esteem in which Ireland was held internationally. No mention of the expense and hours involved, that might have been put to more productive use elsewhere.

Small, newly-emerging states in far-flung places were targeted, flattered and entertained. Like a Fianna Fáil politician seeking the last vote up a mountain boreen, diplomats canvassed every remote corner of the oceans from the Comoros to Vanuatu. No palm tree in Oceania was left unclimbed.

Foreign Affairs won’t say how much it spent on the election in 2001, but Canada spent $10 million to win a term on the council, according to a study by Prof David Carment of Carleton University, Ottawa. He questioned the return on such an investment as, even then, the power of the Security Council was beginning to wane amid infighting among the five permanent members, each of whom holds a veto and can block any proposal. Canada is once again campaigning for the two-year term on the council, beginning in 2021.

It is competing against Ireland, Norway and San Marino for the two seats allocated to what is known as the Western European and Other States bloc. In preparation for the fight, Ireland is pulling a senior diplomat out of Europe to lead the campaign. Geraldine Byrne Nason, currently Ambassador to France, is to become the permanent representative to the United Nations in New York.

It can be argued that her contacts and experience in Paris would be of more value to the country during the Brexit negotiations than electioneering in New York. The same could be said of our current Ambassador in London, Dan Mulhall, who is being transferred to Washington.

Whatever the niceties of this season’s musical chairs in Iveagh House, one would expect the Government to concentrate the full force of its collective diplomatic wisdom and experience on the Brexit negotiations, which it keeps on telling us will be prolonged and complex.

It also likes to remind us how we play a vital role at the United Nations and has the audacity to boast on its website that it has played “ a prominent role” in reinforcing the system of UN human rights implementation. In a letter to The Irish Times recently (March 20th) Dr Arthur O’Reilly, a respected expert in the field, pointed out that Ireland has still not ratified the 2006 UN Convention on the Rights of Persons with Disabilities. Recently too the UN Human Rights Committee criticised Ireland for its tardiness in dealing with the rights of women and children (among others).

Is Government vanity taking precedence over the rights of citizens? And Brexit?

Wesley Boyd is a former diplomatic correspondent of The Irish Times

1 New Zealand marks 100 days without a case of coronavirus
2 10 upgrades that will add value to your home and 5 that probably won’t
3 Are we really facing the death of the office?
4 Gardaí cannot prosecute people who breach midlands movement restrictions
5 Covid-19: One more death and 174 further cases confirmed in State
Real news has value SUBSCRIBE