Covid-19: Economy could take 3½ years to return to pre-crisis levels 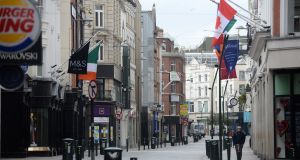 Dublin’s Grafton Street is seen at the height of the Covid-19 restrictions. The Irish Fiscal Advisory Council has said it could take more than three years for the economy to recover from the impact of the pandemic. Photograph: Dara Mac Dónaill/The Irish Times.

Ireland’s economy could take up to 3½ years to return to the levels of activity seen before the coronavirus pandemic, the Oireachtas committee examining the State’s response to Covid-19 has heard.

Sebastian Barnes, acting chairman of the Irish Fiscal Advisory Council, said there were “huge uncertainties” ahead for the economy but the broad phases of the crisis and recovery were relatively clear.

“As the economy exits lockdown, a sizeable stimulus would help the recovery,” he said. “However, some adjustments are likely to be needed down the line to get the debt ratio on a safe downward path again.”

Mr Barnes said the council - an independent adviser to the State on public finance and budget matters - had looked at three scenarios and that economic activity would fall sharply in all of them.

“The crisis will have a lasting effect. The scenarios imply it would take two to 3½ years to return to pre-crisis levels of activity. By contrast, the Irish economy took 11 years to recover after the financial crisis,” he said.

Mr Barnes said a €10 billion stimulus package set out by the council in its fiscal assessment report was an “illustrative figure”. He told Sinn Féin finance spokesman Pearse Doherty a much larger package could be needed.

Mr Doherty said the sum was “modest” given the employers’ lobby Ibec had called for €22 billion and that he believed more than €30 billion would be needed. Mr Barnes said their figure “is not supposed to limit the amount that is spent”.

Prof Michael McMahon, a member of the fiscal council, said the recession from the pandemic “is a very different form of recession than it was in the past because lock down and social isolation was a public health measure”.

He said Ireland’s fiscal position was much healthier heading into the pandemic than at the time of the financial crash. He said large areas of the economy had been badly affected and that a “whatever it takes” type of investment would be appropriate initially to respond to the crisis.

Prof McMahon replied: “We just don’t know and a lot will be depend on the ongoing levels of support from European Central Bank and the European Commission.”

Mr Barnes said a “more violent and costly adjustment” would be needed in the future if nothing is done to address the threat posed by climate change.

He said the draft programme for government announced on Monday had set “a clearer target in this area” and that taking action in this area “is a very important thing to do”.

“Some of this could be achieved for example by higher environmental taxes such as the carbon tax or through charges and things like that,” he said.

He added that the transition to the low carbon economy “could create activity in the economy which will create employment and tax revenues”.

“So it’s not a wholly negative story in the public finances,” he said. “But there are also some areas where public investment will be needed to achieve those objectives and where potentially incentives might need to be provided and in that case that will be a cost to the State and that needs to be factored into the State’s plans.”

Responding to Green Party finance spokeswoman Neasa Hourigan, Mr Barnes said “hopefully the economic plans can be aligned to make sure that that can be achieved in a way that is effective but is also consistent with the sustainability of the public finances”.

Ms Hourigan, who abstained in the parliamentary party vote on whether to back the draft programme for government, asked what fiscal measures would be needed for the State to meet its climate change commitments.

Mr Barnes said it was a very important issue for the public finances.

“If climate change isn’t addressed there is a potential cost in terms of mitigation particularly in terms of flooding that a number of other costs will be related. And if nothing is done there is the cost of more violent and costly adjustment would be needed down the way.”