More than 2,400 members have registered to vote on the programme for government 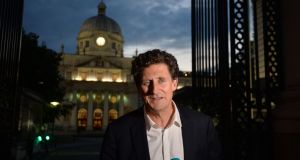 Green Party leader Eamon Ryan: The party needs to get approval from two thirds of its members if it is to enter coalition. Photograph: Alan Betson / The Irish Times

Senior figures in the Green Party say Thursday’s eight-hour online convention involving almost 2,500 members will be crucial in determining the outcome of its vote on entering government.

As the deadline for registration closed yesterday, more than 2,400 of the party’s 3,600 members had contacted the party to say they would vote on the programme for government, with postal votes being counted on June 26th.

The convention will begin with speeches by leader Eamon Ryan and Catherine Martin. The deputy leader’s speech, in particular, will be closely monitored to see if there are any major conditionalities or reservations in her endorsement of the coalition deal.

In what was portrayed as a significant boost by Green members campaigning for the coalition, the prominent climate change expert Prof John Sweeney yesterday endorsed the deal saying it had the potential to turn Ireland from a climate change laggard into a leader.

Prof Sweeney had raised concerns on Tuesday about references to methane in the document, which was received by some as him opposing the programme.

However, in a video message yesterday he clarified his position saying he supported the programme in the round, while disagreeing with some individual issues.

“Pragmatically, this is the best deal we are going to get in the near future and I am supporting it,” he said.

While TDs campaigning to adopt the programme for government have said they have received positive feedback, it was accepted that the opposition to the deal is much larger than it was in 2007, when only a handful of members publicly opposed it.

“There is certainly a more vocal and organised opposition than there was in 2007,” said Gavin Nugent, the chair of the Young Greens.

The party’s youth wing looks like it will follow the youth organisations of Fianna Fáil and Fine Gael by formally rejecting the proposed coalition.

Party sources said yesterday that the votes of the 800 members based in Northern Ireland could also be critical to the outcome on Friday. Neither the Northern Green organisation, nor its 10n public representatives (two MLAs and eight councillors), has as yet taken a public position on the programme. Northern leader Clare Bailey abstained when a vote was taken by the wider parliamentary party on Monday night, on the basis that she had not had the opportunity to read the document in its entirety.

The party needs to get approval from two thirds of its members if it is to enter coalition.

The national executive of Young Fine Gael yesterday unanimously voted to instruct its three representatives on the party’s executive council to vote against the deal.

In a statement, it said: “It is our members’ view that (the party’s) values and Fine Gael’s distinct identity, will be irreparably jeopardised by entering into a government with Fianna Fáil and the Green Party.”

Ógra Fianna Fáil yesterday restated its opposition to a coalition with Fine Gael. Its chair, Tom Cahill, it said: “We cannot reconcile the neglect the country has endured under Fine Gael in government. We fought and campaigned hard to remove them from office in this year’s general election.”

The Young Greens have yet to adopt a formal position on coalition. Mr Nugent said yesterday it would do so after the party’s special convention.

However, Mr Nugent said the preponderance of sentiment among the Young Greens was to vote against.

He said the concerns raised by younger members of the party included he lack of costings, timelines and delivery plans. “There is a fear of history repeating itself,” he said.