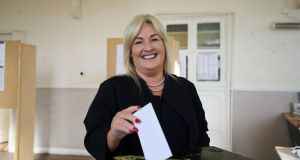 Verona Murphy had secured more than 10,000 votes by the time she was eliminated in the recent byelection. File photograph Nick Bradshaw

Labour Party leader Brendan Howlin is hoping to be in pole position to take one of the first few seats in this constituency. With the election of Mick Wallace to the European Parliament, Fianna Fáil’s Malcolm Byrne only recently nabbed a seat here. The party will be hoping to keep hold of two seats on February 8th.

Outgoing TD James Browne is likely to hold a seat, and while Byrne will fight again, a major issue for him is the geography of the situation in that his strongholds are in the north of the county, as they are for Browne.

Byrne will likely have an eye on his party rival Michael Sheehan in New Ross, who is one to watch. The party’s decision to run four candidates has been described by one analyst as “daft”.

Fine Gael looks set to retain two seats for Michael D’Arcy and Minister of State at the Department of Defence Paul Kehoe, although some point to the fact that Kehoe was not elected until the 14th count in 2016, and only marginally ahead of Sinn Féin’s Johnny Mythen. Mythen, however, lost his seat in last year’s local elections and did not poll as high as the party had hoped in the byelections.

The one potential upset could be Verona Murphy, the controversial ex-Fine Gael byelection candidate who was subsequently dropped from the ticket. She had made remarks during the byelection campaign linking migrants to Islamic State.

The president of the Irish Road Haulage Association has announced she will run as an Independent in this election. Although she secured more than 10,000 votes by the time she was eliminated in the byelection, the suspicion is that most of these were Fine Gael votes which will not return to her.

In summary, many believe Wexford will end up with a 2:2:1 for Fine Gael, Fianna Fáil and Labour.

Housing, health, farming under pressure, the status of Rosslare Europort and the Rosslare rail line will all be big issues in Wexford.