Drip feed of information may backfire and damage Varadkar

An Taoiseach Leo Varadkar has confirmed he will campaign for Ireland's abortion laws "to be changed and to be liberalised" during a per-recorded interview on BBC radio's Today programme. Audio: BBC Radio 4 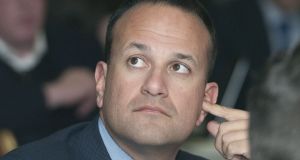 When Taoiseach Leo Varadkar decided to break his silence about where he stood on abortion it was through an unexpected source and he only partially explained his position.

Mr Varadkar confirmed this morning he will campaign for a liberalisation of Ireland’s abortion laws.

Somewhat surprisingly, he chose to announce this to an international audience via BBC Radio Four.

Why he opted to do this is interesting as the Taoiseach has not lacked opportunities to share his views with Irish media outlets which have continuously asked him to set out where he stands on the referendum.

It is one month since the Oireachtas committee recommended repealing the Eighth Amendment and allowing abortions up 12 weeks.

Varadkar had declined to state his position on those proposals over this time, insisting he would wait until the Cabinet decides.

During his recent visit to Davos Mr Varadkar again said he would wait until after this meeting to set out his views.

Given the Taoiseach has been asked a version of the same question many times in recent days - and more so since Fianna Fáil leader Michael Martin stated his position clearly on January 18th - it is odd he chose not to provide the stock answer he had been using up to now and instead tell the BBC he will campaign for liberalisation.

Despite his comments we are none the wiser as to whether he supports the 12 week proposition or not.

The abortion referendum will be discussed at a special Cabinet meeting on Monday.

His spokesman said on Saturday the Taoiseach will set out his views in more detail after the Cabinet meeting.

His failure to date to outline his position has been described as a strategy and an attempt to bring as many people along with him.

It has also been seen as a delaying mechanism to avoid making decisions on what is seen as a politically difficult issue.

He has been clear that he is engaged in a listening exercise and will not be categoric until the Cabinet formally takes decisions.

To the international audience, Varadkar is young, and liberal and part of a new generation of leaders. Perhaps his desire to maintain that image played a role in this situation.

Politicians must have the courage and say where they stand, and Varadkar must not shirk away from his responsibilities.

This drip feed of information from the Taoiseach may be part of a grand plan but it also may backfire and damage Varadkar in the long run.