Varadkar says he will ‘campaign for liberalisation’ of abortion laws

An Taoiseach Leo Varadkar has confirmed he will campaign for Ireland's abortion laws "to be changed and to be liberalised" during a per-recorded interview on BBC radio's Today programme. Audio: BBC Radio 4 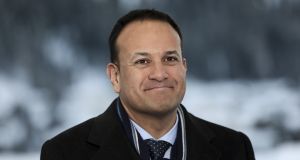 Taoiseach Leo Varadkar has said he will be “campaigning for the liberalisation” of Ireland’s abortion laws during the upcoming referendum.

In comments on Saturday morning to the BBC’s Today programme Mr Varadkar said the country’s abortion laws were “too restrictive” and he supported liberalisation.

Mr Varadkar also said his views had evolved since 2014 when he had described himself as “pro-life”.

He said on Saturday the terms “pro-life” and “pro-choice” were incapable of reflecting the complexity of someone’s views on a very “private and personal” matter.

“I think sometimes that term ‘pro-life’ and ‘pro-choice’ can be misunderstood. I think even people who are in favour of abortion in certain circumstances are pro-life.”

Asked did this mean he was no longer willing to describe himself as “pro-life” Mr Vardakar responded: “Again, what do those words even mean?”

“Every single person I know who says they are pro choice believes in some sort of restriction. They don’t believe in late term abortions for example up to 38 weeks.

“These terms pro-life and pro-choice don’t really comprehend the complexity of this issue. Which is a very private and personal one and one I think that contains a lot of grey areas . . .”

“Even people who are in favour of abortion in certain circumstances are pro-life, you know I still believe in life but I understand there are circumstances in which pregnancies can’t continue and I don’t think it’s the role of the State to essentially criminalise people.”

Mr Varadkar said the intention was to hold a referendum “as soon as we possibly can” and that the timing was not dependent on the anticipated visit by the Pope in August.

However, Mr Varadkar said the fact that Ireland had a minority Government meant the referendum could get delayed.

“People in Ireland deserve to have their say on this issue. When the ban was put into our constitution I was four years old and nobody under 52 has had a say in this.”

“I think people should be allowed to have their say. That’s why I am asking my Government and will be asking our people to have a referendum on this.”

Mr Varadkar’s confirmation of his stance on the referendum comes as something of a surprise as he had said in Davos he would make his position clear after a special Cabinet meeting on Monday night subject to there being an agreement at Cabinet.

A spokesman for Mr Varadkar told The Irish Times on Saturday the Taoiseach would set out his position “in more detail” following the Cabinet meeting.

At this meeting the Cabinet is expected to give the formal go-ahead for a referendum and to decide to insert a clause enabling the Oireachtas to legislate for the termination of pregnancy.

The wording of the referendum has yet to be decided.

The Oireachtas Committee on the Eighth Amendment concluded in December 2017 that Article 40.3.3 should be removed from the Constitution and politicians should be allowed to legislate for abortion.

Mr Varadkar has not set out his position in as much detail as Fianna Fáil leader Micheál Martin who, in a surprise announcement on January 18th, said he would support the repeal of the Eighth Amendment and the promised legislation to introduce abortion on request in the first three months of pregnancy and in specific circumstances thereafter.

Mr Martin’s announcement caused a shock among many of his TDs as he did not give them notice of his declaration.

The latest Irish Times/MRBI opinion poll, published on Thursday, found the majority of voters will support the introduction of abortion on request up to 12 weeks into a pregnancy.

A clear majority of all voters - 56 per cent - said they would vote in favour of the constitutional change, with 29 per cent not in favour.

Fifteen per cent said they did not know or offered no opinion.

This amendment guarantees to protect as far as practicable the equal right to life of the unborn and the mother.

It prohibits abortion in almost all cases.

This article was interpreted by the Supreme Court in its judgment in the X case in March 1992. It ruled that abortion is permissible in the State where the continuation of the pregnancy poses a real and substantial risk to the life, as opposed to the health, of the mother and where such a risk could not be averted except by means of an abortion.

A substantial risk to the life of the mother included a risk of suicide.

You can check the stance of TDs and Senators on this issue on our Abortion Tracker.