€75k for report examining how to help returning emigrants 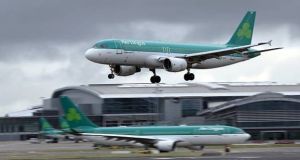 Banks will not accept foreign revenue documents from customers who had lived in Canada, the United States and other countries the Dáil has heard. Photograph: Getty

The Government has commissioned a €75,000 economic report on the improvements needed to facilitate returning emigrants.

Tánaiste Simon Coveney has conceded that the State needs to do more to help Irish citizens moving home permanently, who are facing major difficulties in getting banks to accept income and other financial documents for mortgage approval.

Returning emigrants have also reported problems in getting car and health insurance.

Mr Coveney said “there is a whole series of examples of areas where we need to provide more seamless transition than is currently available for people who are coming home.

“That is why we have commissioned an economic report which we are spending approximately €75,000 on,” he said. The report will be ready “in the coming weeks”.

Fianna Fáil foreign affairs spokesman Darragh O’Brien highlighted the problems emigrants were facing particularly with financial institutions and called for the Government to meet the Irish Banking Federation, Insurance Ireland and health insurers such as the VHI about their lack of co-operation with Irish citizens returning home.

Mr O’Brien said it was very welcome news that so many emigrants were returning as he cited Central Statistics Office figures estimating 27,400 people came home in the year to April 2017.

But he said the vast majority of returning Irish emigrants had serious difficulties getting car insurance. “They are rated on the basis that their previous driving experience in places such as Canada is not taken into account and their previous driving record in Ireland including no-claims bonus, is all set aside.”

Many were being refused health cover for the first 12 months of their homecoming and the majority could not transfer their health insurance to Ireland.

And he said banks were now asking emigrants making mortgage applications for an official Irish Revenue statement - a P60 - for their previous year’s earnings.

Banks will not accept foreign revenue documents from customers who had lived in Canada, the United States and other countries, he said.

The Tánaiste told Mr O’Brief in the Dáil this week that the report would “itemise the kind of things you have provided examples and anecdotal evidence of in terms of the issues which require intervention”.

Mr Coveney said Minister of State for the Diaspora Ciarán Cannon chaired the inter-departmental committee (IDC) on the Irish abroad, which works to ensure the Government’s approach on diaspora policy works “in a joined-up way”.

Mr Cannon will play a co-ordinating role between Departments “to ensure we can make intervention where appropriate in various sectors and areas”.