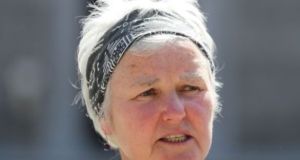 People Before Profit’s Bríd Smith: will be examining the record of the Dáil to determine if other TDs have similarly criticised the judiciary.

A Dáil committee has agreed to investigate comments made by People Before Profit TD Bríd Smith in relation to a High Court judge.

The Dáil’s committee on procedure met on Thursday to consider a complaint from former minister for justice Charlie Flanagan in which he said the deputy’s comments in the Dáil in relation to the judge were “highly personalised” and “an attack on democracy itself”.

In the Dáil last month, Ms Smith said it was “a day when tens of thousands of workers will wake up to the realisation that a learned judge of the High Court, who earns more than €220,000 per year, has decided in his wisdom that an electrician who may earn €45,000 per year is possibly overpaid, and has then struck down a sectoral employment order that will affect tens of thousands of workers already on low pay. This is a war on workers, and it is time for workers to fight back.”

On Facebook she described Mr Justice Garrett Simons as a “right-wing judge”.

Mr Flanagan said he believed the People Before Profit TD was “waging something of a campaign” on social media, and called on the Ceann Comhairle to “take the appropriate steps”.

Following an initial consideration of the matter, the committee agreed on Thursday that the complaint was not vexatious and merited further investigation.

It is understood Ms Smith will be given an opportunity to respond over the coming weeks.

She said she would be examining the record of the Dáil to determine if any other TDs had similarly criticised the judiciary and would continue to defend her stance to the committee.

Meanwhile, the Government has announced it will appeal to the Supreme Court the High Court’s finding that parts of industrial relations legislation allowing for the making of sectoral employment order covering minimum terms and conditions were unconstitutional.

Tánaiste and Minister for Enterprise, Trade and Employment Leo Varadkar said that the pay and conditions of workers cannot be affected in the meantime.

The Irish Congress of Trade Unions (Ictu) warned Mr Varadkar in a letter last Friday that the High Court decision on sectoral employment orders could have “grave implications” for the pay, terms and conditions of construction workers in particular.

However, some contractors had warned that abiding by provisions in sectoral employment orders in the electrical sector would have forced them to lay off staff.

Mr Varadkar told the Dáil on Thursday that the Government intended to appeal the judgment to the Supreme Court.

“This is a very important issue for those whose pay and terms and conditions are governed by sectoral employment orders, including electrical contractors, construction workers, some engineers and contract cleaners. I have considered the matter with the Minister of State, Deputy [Damien] English, and sought the advice of the Attorney General.

“I can confirm to the House that it is our intention to appeal the judgment to the Supreme Court. We have until July 14th to make that appeal and will be making it.

“I wish to send a clear message from this House to all affected workers and their employers that until the case is heard by the Supreme Court and a judgment is made, there must be no unilateral diminution of the workers’ terms and conditions by any employer. It is important that that is known.”

Labour Party leader Alan Kelly, who raised the issue with Mr Varadkar in the Dáil on Thursday, supported the Government’s move.

“This is a welcome statement from the Tánaiste, and it is essential now that the Government act quickly, and also ensure that in the meantime the case isn’t used to weaken terms and conditions in the construction industry.”