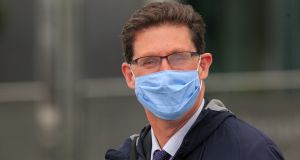 Minister for Transport Eamon Ryan: ‘A so-called green list ... will be published on July 20th, or prior to that.’ File photograph: Gareth Chaney/Collins

Minister for Transport Eamon Ryan has confirmed the State’s “green list” of countries deemed safe for travel will not come into effect until after July 20th.

The Government had said in June that the requirement to quarantine for 14 days upon arrival would be eased for some countries from July 9th, but Mr Ryan said this had been delayed due to concern about travel-related infections.

“A so-called green list ... will be published on July 20th, or prior to that,” Mr Ryan said in an interview with Newstalk radio on Sunday. “The green list will be operating after that” date, he said.

The British government on Friday ended coronavirus quarantines for people arriving in England from more than 50 countries.

The Green Party leader said the Government would drop the quarantine for countries that had infection rates “similar if not better than our own”.

Mr Ryan said that the Government was considering “a certain element of testing” for Covid-19 at airports, but that every visitor would not be tested.

The Government did not want an “avalanche” of Irish people travelling abroad and he said it would continue to encourage people to take holidays at home. – Reuters