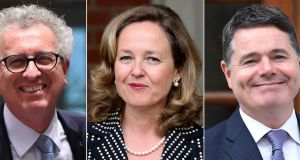 Minister for Finance Paschal Donohoe will on Thursday seek election to one of the least-known but most influential posts in the EU – president of the Eurogroup, the committee of euro zone finance ministers.

Voting takes place during a video conference of the finance ministers, during which the three candidates – Mr Donohoe, Spanish finance minister Nadia Calviño and her Luxembourg counterpart Pierre Gramegna – make their final pitch for votes.

Intensive canvassing for the secret ballot has been taking place over recent days, during which Taoiseach Micheál Martin and Tánaiste Leo Varadkar both hit the phones to European colleagues and allies, insiders said.

There are 19 ministers on the group, meaning the successful candidate needs 10 votes to secure election. If none of the candidates manage to reach that quota on the first round of voting, the candidate with the lowest number of votes will be asked to drop out, leaving the final two to fight it out on the second round.

The secret ballot makes it difficult to predict the outcome with any degree of confidence, though Mr Donohoe has the advantage of the backing of the EPP and Irish sources believe he will have the backing of Austria, Cyprus, Latvia, Slovakia and Slovenia, among others.

However, Brussels sources point out that his pitch for the job is a bit similar to the Luxembourger Gramegna – a bridge builder from a small country– and it will be crucial to his hopes that he beats Mr Gramegna on the first round and can attract his votes for the second round.

Much depends on how France will go, Brussels insiders say. Ms Calviño is seen in some quarters as somewhat divisive and Spain already has a top EU job with Josep Borrell, and she also would be similar in profile to the outgoing Mário Centeno as an Iberian social democrat. But some like the idea of a dynamic woman in the role and she has the support of Greece, Italy and Portugal plus Germany.

The Netherlands and Belgium have governments in Mr Gramegna’s political grouping, but The Hague would pick Mr Donohoe in a heartbeat if it meant blocking Ms Calviño, it is reckoned in Brussels.

While Germany is backing the Spaniard, Dublin hopes that their support will not be sufficiently full-throated to include throwing Germany’s full weight behind her and canvassing on her behalf.

The power of the role depends on the ability of the person to wield it. The group is seen to have declined in prominence under Mr Centeno, though it was highly influential during the financial crisis when the Dutch finance minister Jeroen Dijsselbloem was the group’s head.

With the EU seeking to agree a massive funding package to deal with the Covid-19 pandemic and stimulate the EU economy, the group is likely to grow in prominence in the months ahead. EU leaders will meet next week in Brussels in a bid to reach agreement on the funding package.