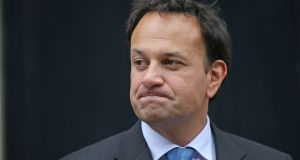 Tánaiste Leo Varadkar has said he will come down on the retail banks “like a tonne of bricks” if they have misled the Government and make a profit out of the payment breaks offered to mortgage holders during the Covid-19 pandemic.

The banks have deferred payment for six months but interest on mortgages and loans will continue to accrue for 140,000 customers, including 80,000 mortgage holders.

Sinn Féin finance spokesman Pearse Doherty accused the Tánaiste of “naivety” and insisted the Government had been misled by the financial institutions after Mr Varadkar said he was “very blunt” with the five banks at a meeting in May.

Answering leaders’ questions in the Dáil for the first time as Tánaiste, he said he told banks that in extending the mortgages “they should only be covering their own costs” and it was not acceptable for them to make a profit.

If it turned out that they made an additional profit or premium “I would see that as serious as the scandal of the tracker mortgages” and he “will come down on them like a tonne of bricks”.

A “fundamental thing that I need to find out in the next couple of weeks” is if the banks are going to make any extra money out of this.

Accusing Mr Varadkar of “naivety” he asked him if he was suggesting that a six-month delay in payments was costing that bank €6,200. No country in the EU was faced with penalties as high as in Ireland.

The Donegal TD said he had seen minutes of the meeting between Mr Varadkar, then taoiseach and Minister for Finance and the five banks on May 11th about the payment breaks.

In the minutes the banks said the regulator required them to charge interest and if they did not do so the accounts would go into default, but “neither of these claims are true”, he said.

The Tánaiste, however, disputed this account and said that while he had not seen the minutes he was at the meeting and that the banks “never claimed that they couldn’t waive the interest. They did say it would be possible for them to waive interest for that period.”

But the Sinn Féin TD said that unless the minute taker was at a different meeting “there is a serious issue here” because in “black and white” it was written down that the banks said they needed to charge the interest.

Mr Varadkar told him the banks’ issue was that “somebody has to pay the cost of the payment break”. Ideally the cost should come out of the banks’ profits but they had none this year, he said. The costs should not fall on taxpayers or mortgage holders who are up to date on their payments and it was currently on those availing of the break.

Mr Doherty raised the matter in the Dáil following confirmation earlier this week by the Central Bank that under regulatory rules banks are not required to charge interest for the duration of the breaks.

Irish banks are charging more interest than any other EU banks, Mr Doherty said. He pointed out that other EU countries including Spain had introduced legislation to prevent interest being charged.

Mr Varadkar said different countries are doing different things but it was broadly in line with Ireland and he said “it’s not as you presented it in your comments”.

He said “the fundamental point is are the banks going to make extra money out of this. If they are, that is not acceptable and we will deal with that.”