New Cabinet younger on average than outgoing one, with no members older than 60 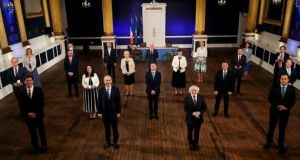 More than a quarter (26 per cent) of the new ministerial positions have been allocated to women, an analysis of the State’s new Cabinet shows.

There are 13 women in the coalition Government and eight of them have been appointed Ministers.

Green Party Senator Pippa Hackett has also been appointed as a Super Junior Minister of State, the first appointment of a Senator to Cabinet since the early 1980s, bringing the total number of women holding senior and junior ministries to nine.

This is an increase of 5 per cent on the outgoing government where 21 per cent of ministerial positions were held by women. The last government had 11 female TDs, seven of whom held Cabinet positions.

The percentage of women appointed to senior Cabinet roles remains the same as the previous government at 27 per cent, however the percentage of women holding junior ministerial roles has increased from 16 per cent to 25 per cent. There is one additional Minister of State role in the current Cabinet bringing the number of Cabinet members to 35.

As two of the women’s positions are super junior roles, Ms Hackett and Fine Gael’s Hildegarde Naughton do not have a Cabinet vote.

The new Cabinet is younger than the outgoing Cabinet and has no members currently over 60. An analysis of the former cabinet’s age in June compared to the current Cabinet’s shows the average age is 45.6 years old, 7.1 years younger than the previous cabinet’s average age of 52.7 years. While the oldest member of the last cabinet, the then minister for transport Shane Ross, was 70, the oldest member of the new Cabinet is Taoiseach Micheál Martin who is 59, and will turn 60 in August. The last cabinet had 35 per cent of its minsters over the age of 60, however over half (57 per cent) of the current Cabinet is aged between 40-59 while almost one-fifth (17 per cent) are under the age of 40, compared to 12 per cent of the previous cabinet.

As per the previous cabinet, the majority of Ministers (63 per cent) are from the Leinster region with 11 of the 35 posts awarded to those from the capital. Seven of Dublin’s 11 constituencies are now represented by a Cabinet member and Dublin West has the highest number of ministerial posts in Dublin with Tánaiste and Minster for Jobs Leo Varadkar (FG), Minister for Children, Disability, Equality and Integration Roderic O’Gorman (GP) and Minister of State for Financial Services, Credit Unions and Insurance Jack Chambers (FF) all from the constituency. Cork South-Central is the only other constituency to have three TDs in the Cabinet and is represented by Mr Martin, his party colleague Michael McGrath as Minister for Public Expenditure and Reform and Fine Gael’s Simon Coveney who is continuing as Minister for Foreign Affairs.

While a number of Cabinet members such as Mr Martin and Green Party leader Eamon Ryan have been TDs for decades, taking into account all Cabinet members’ occupations prior to entering the Dáil, almost a fifth of the Cabinet (17 per cent) are from a business background; 14 per cent were involved in education while accounting, agriculture and finance (11 per cent respectively) are also among the main sectors some of the ministers have worked in. Those who have direct work experience with their portfolio include secondary school teacher Norma Foley (FF) who is Minister for Education; farmer Martin Heydon (FG) as Minister of State for Farm Safety at the Department of Agriculture and his department colleague Ms Hackett, an organic farmer and super junior Minister of State for Land Use and Biodiversity.

1 Coronavirus: Non-essential travel from US set to be banned within days
2 ‘Our hearts are broken’ – implications of fresh lockdown sink in
3 Google to roll out software fix to remedy issue with Covid app
4 Portlaoise locked down: ‘Our older clientele haven’t been back’
5 Meath creche awaits test results after two cases of Covid-19
Real news has value SUBSCRIBE