Analysis: The party knows entering coalition is a risk, and it must show tangible gains in 2020 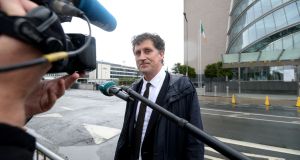 Nobody knows the fate of smaller parties in government better than the Greens, who ended up being devoured after their bracing first stint in power between 2007 and 2011.

So is it lesson learned this time? Or will history repeat itself? Is the Green Party wise to the ways of the two bigger parties, and the rigours of day-to-day governing, or will it end up being suckered again?

History suggests the party will lose at least half of its seats at the next general election, even if the Government does well. It could lose all of them if the recession is deeper and longer than we expect.

Its members know the risk they are taking, and that they will probably ultimately fail in attaining all its big goals. But failure can be relative – some core victories can be secured, seats can be saved.

The last time, there were six Greens against more than 70 Fianna Fáil TDs. Now the two pillar parties have been greatly reduced and the partnership is not as lopsided.

In 2007, the party got some of its core aims included in the programme for government, but initiatives could not be delivered, or were subject to soft-shoe-shuffle delays from Fianna Fáil.

While this programme, with its lack of specificity, could hardly be described as an action plan, there are far more measurable timelines and target dates in it than in previous plans.

There is another hump on the road for the Greens. Most of the things required on climate change and especially a reduction in the State’s carbon emissions cannot be achieved quickly.

Some will take years: the insulation of 500,000 homes to B2 standard; the construction of cycleways and pedestrianisation; deep ocean wind-power and tidal power projects (if they ever happen); more forestry, and 50,000 social homes.

On Sunday, the Greens admitted it will take the lifetime of the Government to achieve one of the party’s key aims, to end direct provision.

Politics is an immediate business, all about short-termism, and it does not sit easily with strategies that sometimes take decades to unfold.

Therefore, the party must show tangible gains in 2020: a climate action Bill within 100 days and the establishment of the Climate Advisory Council that will set a five-year carbon budget.

The just transition plan needs to be delivered early, as will a strong policy statement setting out the State’s withdrawal of support for a liquefied natural gas plan on the Shannon estuary in north Kerry.

Minister for Integration Roderic O’Gorman must within months improve the lives of asylum seekers in direct provision, in line with the recommendations of the Bryan McMahon-led working group. A White Paper on direct provision is due, too, by the end of 2020.

And then there is the social justice aspects – the promise to deliver 50,000 houses; to ensure that the most vulnerable are protected, and the notion of a just transition is honoured. For 25 per cent of its membership, the party will need to demonstrate commitment in these areas. As the leading internal proponent of this approach, Neasa Hourigan, pointed out on Saturday: “I think the best way forward is firstly to continue to advocate for people in our community who are marginalised, for people who are driven into poverty, people struggling to pay their rent, those who need affordable housing, children, people with disabilities, carers.”

At budget time, more details will emerge of the carbon action fund (worth €9.5 billion) and more detailed breakdowns of how it will be spent (€3 billion is set to go towards social provision; €1.5 billion for farmers through a new Rural Environmental Protection Scheme, and €5 billion for retrofitting).

Some of these big retrofit and renewable energy programmes will benefit from the Government’s big stimulus programme which will be announced in October.

Covid-19 has presented an immediate challenge for the Greens’ transport plans, as there will be less demand for bus or rail transport in the short to medium term.

That will leave the new Minister for Climate Action and Transport, Eamon Ryan, focusing on other measures, including walking and cycling infrastructure, plus remote working. Ryan has also retained responsibility for broadband, so one of the ideas might be to set up more local hubs for remote workers using the 300 centrepoints of the local rural broadband network.

The party will also need to show traction on local cycling plans, cycling officers, transport studies in Galway and Cork, new incentives for using electric vehicles, progress on the Dublin Metro, and rural transport. In non-transport areas, it will need to make a strong good start on solar energy, renewable energy (the aim is for the State to have 70 per cent renewable energy by 2030), organic farming, afforestation, rewetting of bogs, and the land-use policy, which must be in place within 24 months.

The overarching proof of the pudding will be the 7 per cent average emissions cut target. It might be achieved in 2020 because of the coronavirus pandemic, but emissions could creep up again next year. If by the middle of 2022, the Greens are not making headway, their time in power will have been in vain.