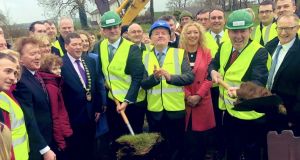 The Taoiseach was speaking in Co Sligo where he and Minister for Transport Shane Ross were turning the sod on a €150m road upgrade between Castlebaldwin and Collooney. Photograph: Twitter

Contingency plans are in place to recall Ministers travelling abroad for the St Patrick’s Day celebrations, in light of ongoing uncertainty over Brexit, the Taoiseach has said.

But Mr Varadkar said he himself was making “quite a short trip” to Washington and Chicago and believed it was actually an important time to go.

“We have put in place contingency planning to recall Ministers from overseas if we need to. We have a backup plan,” he said. “But the trip is going ahead. I think it is actually an important time to go to Washington, because we need to really make our case in Washington DC and we have some very strong supporters in Congress.”

He said people in Washington had been saying very loudly and clearly that the US is opposed to a hard border on the island of Ireland and that support from the Irish caucus in Congress was very important.

The Taoiseach was speaking in Co Sligo where he and Minister for Transport Shane Ross were turning the sod on a €150 million road upgrade between Castlebaldwin and Collooney, a stretch of roadway on which 30 people have died.

The notorious 14km stretch where campaigners erected 30 white crosses to commemorate each life lost, has been likened to a graveyard. It will now be upgraded to dual carriageway standard.

A second road project, the €18 million Western Distributor Road, which was also unveiled on Friday will open up access to the IDA’s new industrial park at Oakfield. Sligo county council’s chief executive Ciarán Hayes said the new projects would be “transformative” .

Mr Varadkar said the project was really important because so many lives had been lost there.

It was also because it was a key feature of Project Ireland 2040 and would open up Sligo for more investment, more jobs and increased population, he added.

Mr Ross said it was particularly important because of all the tragedies there. “The most important reason we are doing this is because we hope to save lives,” he added.

The ceremony was attended by members of the N4 Action Group who have spent 15 years campaigning to have the road upgraded. “It’s a bittersweet day because we are thinking of all those who died on that stretch of road,” said spokesman Bernard Mulhern.

Asked if he was more or less optimistic about the Brexit negotiations following this week’s turmoil in British politics, the Taoiseach said: “I suppose I am no more nor less optimistic. Part of the problem for the last two years is that British politics has been negotiating among themselves. They made a decision to leave the EU, we respect that decision but it is more and more evident that there was not a consensus on what Brexit would really mean”. He said this had made negotiations difficult .

“I think it is evident to everyone that the political situation in the UK and Westminster is very unstable,” he said. “Both of the main parties, the Conservatives and Labour are losing MPs and there may be more in the days ahead”.

The Taoiseach added: “The lack of political stability, the lack of certainty, the division in Westminster makes the situation very difficult.” But he said Ireland was very much sticking by its position, defending the withdrawal agreement, the protocol on Ireland, and also the backstop which is in that.

He said the legislation on Brexit published by the Tánaiste on Friday was really important preparing us “as much as we can to mitigate some of the harms from a no-deal Brexit that may occur at the end of March”. He said it was designed to ensure that citizens rights were protected around healthcare, around education, while giving additional powers to support and intervene and back businesses which may be vulnerable in the event of no deal.

Questioned about the likelihood of the legislation being passed on time, the Taoiseach said the Omnibus Brexit Bill required the co-operation of the Opposition parties “but in fairness to the vast majority of the Opposition they have been co-operative to date on issues such as this”.

He said the legislation was about making sure we protect the Common Travel Area so people can continue to travel freely between Britain and Ireland, about protecting the right to work in Britain and Ireland, and protecting people’s student grants, their welfare and pension entitlements, and giving extra powers to detain criminals that are wanted in the UK. “So I can’t imagine why anyone would be against this legislation or would try to hold it up.”

Mr Varadkar said his preference would be to see a withdrawal agreement and the Irish protocol ratified by the European Council meeting on March 22nd.

“All we can do is prepare for every outcome, prepare for a no deal as we very much are, but also continuing to work with our European colleagues to assist prime minister [Theresa] May to get the withdrawal agreement ratified – but not ever conceding anything that would contradict the spirit of what has been agreed already.”