UK must not be allowed ‘pursue cheap food policy’ after Brexit 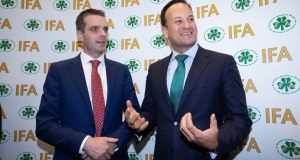 The United Kingdom must not be allowed to “pursue a cheap food policy” after it leaves the European Union, Irish Farmers’ Association president Joe Healy has declared.

“It was very important and is very important that the UK in any deal wouldn’t be able to go off and do their own trade deals with other countries,” he told RTÉ’s Radio 1 News at One.

The value of the UK food market, which is worth nearly €250 billion annually must be maintained, and not undermined by the UK government’s “ability or desire” to see food prices slashed.

Despite concerns about the impact that high tariffs could have on Irish food exporters if the UK quits the EU in late March without a deal, Mr Healy insisted that the IFA was not urging the Irish Government to make concessions in negotiations.

When asked if there was any pressure from farmers on the Government to compromise on the backstop to ensure a better deal, he said: “No, absolutely not, because Irish farmers know there has to be a safety net.”

The priority for Irish farmers “from the day after the referendum” has been the negotiation of the “closest possible trade relationship” between the EU and the UK after it leaves, he said.

Meanwhile, Fianna Fáil’s Lisa Chambers warned that Ireland’s beef industry would be decimated in a no-deal Brexit, if London opened up its market to cheaper South American beef imports.

“The UK is Ireland’s largest export destination for agri-food products with exports valued at €5.2 billion last year. Our beef industry in particular is hugely reliant on the UK market and 48 per cent of all our beef exports went to the UK in 2017.

“If in the event of a no-deal Brexit, the UK opens its doors to South American beef this would be nothing short of a catastrophe for our beef industry and would have a devastating effect on farmers the length and breadth of this country.”

Saying a “no-deal” was “a very real possibility”, Ms Chambers went on: “If this comes to pass and Irish beef is forced to compete in the UK market against cheaper imports from other countries thousands of jobs will be lost.”

She said Irish food companies had “worked very hard” to win places on the shelves in the UK and rightly, with a reputation for good quality, high-standard food.

“Every effort must be made to safeguard this,” she said.