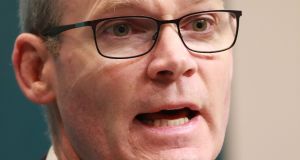 A disorderly Brexit would be a “lose, lose, lose” for the UK, the EU and Ireland, Tánaiste Simon Coveney warned as he published emergency legislation to prepare for such a scenario.

The Minister for Foreign Affairs said he hoped the Government would “never have to use” the omnibus Bill, which covers citizens’ rights and supports businesses, jobs, healthcare, transport, education and energy.

The Government’s preference is for the withdrawal deal, which has been rejected by the House of Commons, to be ratified.

“My only desire is to see this legislation sit on the shelf,” said Mr Coveney.

The country potentially faces “an emergency situation,” he said, and that the new legislation was “the most important thing” the Government needs to do between now and the end of March when the UK leaves the EU.

The Tánaiste told reporters that a hard Brexit would be “a major shock” to the economies of EU member states, “none more so than the UK”.

The UK could still avoid it, he added. “Westminster remains the only place that can take a no-deal Brexit off the table.”

Mr Coveney said the legislation intended to maintain “the things that work so well today”.

“We cannot offset all of the damage that it will do but we are doing everything we can through legislation, through preparation, through investment, through information and through support of the multiple sectors and the multiple numbers of people that will be impacted by that worst-case scenario.”

The landmark legislation, which runs to 70 pages, is aimed at protecting Irish citizens, supporting businesses and jobs and securing continued access to essential services and products.

The Government hopes to have the legislation ready to be passed by the middle of March. The Bill will be debated in the Dáil next week and then before parliamentary committees the following week.

Mr Coveney told a press conference in Dublin he believed a hard border could be avoided in Ireland in the event of a no-deal Brexit through North-South “regulatory alignment, if no other mechanism works”.

He said he hoped this would result in farmers in Northern Ireland being given “preferential treatment” so that it does not result in the imposition of tariffs or any food and animal health checks on the cross-Border trade.

“That is doable; we do it today,” he said. “Even within the European Union, Northern Ireland from an animal health perspective has been treated as an all-island responsibility.”

The single omnibus Bill comprises 15 parts relating to matters within the remits of nine Government Ministers.

Mr Coveney said it was “still too early to say” how much financial support would be provided to companies affected by a no-deal Brexit.

“Until we know – or have more detail about what a no-deal Brexit looks like from a British perspective, in the context of trading environment as regards the application of tariffs or not, then it is hard to anticipate what this might cost to support a business, to allow them to survive through a very difficult transition period,” he said.

He described it as “really extraordinary”, with 35 days until the UK is due to leave the EU on March 29th, that “we don’t have clarity” around that.