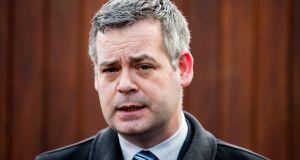 A major barrier to a Sinn Féin Bill which would effectively kill off the sale of Irish mortgages to so-called vulture funds looks set to be removed, The Irish Times has learned.

The “no consent, no sale” Bill, which would seek a borrower’s agreement before sale of a loan to a private equity fund or another owner, passed a Dáil vote before Christmas.

However, it was thought that Government consent was required for the Bill in the form of a “money message” – needed for any piece of legislation with consequences for public spending.

But advice given to Sinn Féin finance spokesman Pearse Doherty now suggests that the money message is not required.

In a letter to Mr Doherty, the clerk of the Dáil wrote that “the above mentioned Bill has been examined and the preliminary view is that there is nothing in the Bill requiring a money message or financial resolution”.

Government sources expressed alarm at the news, saying the implications of the Bill becoming law would be extremely serious.

If passed, the Bill would effectively rule out loan sales from the State’s banks.

Such loan sales are seen as a key tool to be used by Irish banks in driving down their record levels of toxic debt.

“It’s really problematic. It would be the end of that avenue for balance sheet restructuring,” a senior Government source said.

Mr Doherty told The Irish Times he has asked the finance committee to accelerate scrutiny of the Bill, and it has agreed.

“Now the threat of this Bill going no further has been removed, given that Fianna Fáil, Sinn Féin and others support it, I’m confident it will see passage into law,” Mr Doherty said, adding he intended to use his party’s Dáil time to force a second vote on the Bill at the earliest possible opportunity.

Owen Callan, a banking analyst with Investec, said the legislation would also rule out the use of mortgage sales in so-called collateralisation deals, which have become a popular way of Irish banks dealing with bad debts.

“In our view it seems like an ill-advised, reckless and populist piece of legislation that will only increase borrowing costs for consumers, limit the entrance of new banks to the sector, and decrease the value of the State’s stakes in the Irish banks, which will hurt all taxpayers,” said Mr Callan

The finance committee will have to consult with the European Central Bank as the Bill impacts on the role of the Central Bank here.

The committee will then in turn have to report on Frankfurt’s opinions to the Dáil in advance of the committee stage.

The Bill has already provoked comment from the Irish Central Bank, which warned that if it was passed into law, it could trigger unintended consequences, such as an increase in interest rates.

It could also ultimately have a negative effect on financial stability, the bank reportedly warned the Department of Finance.

The Central Bank also warned they may have to hold more capital on their balance sheets, for example, which could limit their capacity for normal lending.

There are no live loan sale processes under way by Irish banks which contain loans secured on family homes, but it is expected that all Irish lenders will consider them as part of their strategies to force down their unusually high levels of non-performing loans.

Permanent TSB sold owner-occupier loans last year in what was seen by the market as a significant step, as the State – the bank’s majority shareholder – did not seek to block the politically controversial sale of loans.