‘Complete review’ of US pre-clearance at Dublin, Shannon 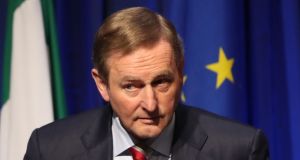 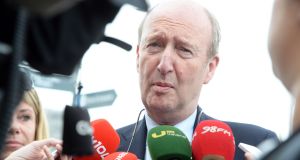 Minister for Transport Shane Ross said ‘no one could expect any Irish Government Minister to approve’ of US president Donald Trump’s policy. Photograph: Eric Luke

The Government is to undertake a “complete review” of US immigration facilities operating at Dublin and Shannon airports as a result of the Trump Administration’s ban on refugees from Syria and on Muslims from seven countries entering the US.

“I’ve asked for a complete review of the pre-clearance facilities in Ireland, ” Mr Kenny said on Monday evening at a joint press conference with British prime minister Theresa May.

Meanwhile on Monday night, the Department of Transport confirmed one person had been refused pre-clearance at Dublin Airport by US immigration staff, in accordance with US preclearance procedures under the Aviation (Preclearance) Act 2009.

It is not as yet known where the person is from, however.

US immigration officers work in Dublin and Shannon Airports, enabling passengers to avoid US immigration and customs when they arrive in the US. However, this arrangement may now be under threat because of the policies adopted over the weekend by the Trump Administration.

A statement circulated by Government Buildings tonight said pre-clearance facilities were “used by 1.18 million people in Dublin and 204,000 people in Shannon last year”.

The Government has made contact with the US administration to convene a meeting to discuss the operation of the facilities, it said.

The Taoiseach reiterated that he intended to accept the invitation to the White house on St Patrick’s Day.

“We have had great influence in the US over the years and we still have that influence. And we intend to use it,” he said.

“It’s more important now than ever before to be able speak face-to-face with President Trump to exaplin to him the matters of importance for us here.

To decline the invitation, Mr Kenny, would be to “become isolationist”.

Dublin and Shannon airports are among the few in the world that offer pre-clearance by US immigration officials, since a deal between the countries in 2008.

Airport authorities have confirmed the US president’s travel ban on citizens from seven mainly-Muslim countries - Iraq, Iran, Libya, Somalia, Sudan, Syria and Yemen - is being implemented by US officials in Ireland.

Mr Kenny said he does not agree with the ban and has ordered a review of the almost decade-old agreement.

I disagree with it’

“In respect of the policy introduced by the American government, I disagree with it,” he told a press conference at Government Buildings.

“I will obviously say that to the [US] president and vice-president when I meet with them.”

Mr Kenny added: “I have asked for a complete review now of the pre-clearance facilities here in Ireland, in respect of the three departments dealing with this, so we can be absolutely clear about the importance of it.”

The Taoiseach’s announcement follows warnings from Minister for Children Katherine Zappone that implementing the travel ban at Irish airports could be illegal.

Ms Zappone had written to Mr Kenny seeking an investigation into its operation.

She suggested it “may be unlawful” because the US-Ireland pre-clearance agreement upholds the rights of people under Irish law.

It is understood Ms Zappone is concerned the implementation of the ban on Irish soil could amount to nationality and religion-based discrimination.

She said Ireland has a moral obligation to “stand with our fellow human beings against discrimination of this kind”.

Speculation is mounting that more Independent Ministers in the minority Fine Gael-led coalition will back Ms Zappone’s stance at a Cabinet meeting on Tuesday.

Sinn Féin leader Gerry Adams has also written to the Taoiseach urging him not to “allow Irish airports to enforce this fundamentally unjust order”.

A joint statement from five human rights organisations - including Amnesty, the Irish Council of Civil Liberties and the Irish Refugee Council - said the pre-clearance agreement means gardaí and immigration officials may be helping to implement Mr Trump’s travel ban.

They have demanded an urgent review of the system to include its suspension if a person’s rights under Irish and EU law are under threat.

“This executive order is a barely concealed attempt to discriminate on nationality and religious grounds, itself a gross violation of freely accepted international human rights obligations,” the statement said.

Junior minister John Halligan said Mr Trump is “close to being a fascist” and backed calls for Mr Kenny to snub the annual invite to the White House for the shamrock ceremony on St Patrick’s Day.

Mr Kenny said he will in fact travel to Washington because it is “more important now than ever before to speak face-to-face to the American president”.

The Taoiseach said he would be putting Ireland’s case to the president on a number of issues, including his disapproval of the travel ban.

Minister for Transport Shane Ross earlier joined other Government Ministers in condemning the US travel ban on refugees and immigrants from several mainly Muslim countries.

Mr Ross stressed the order was not being enforced by Dublin and Cork airport operator DAA or any other Irish agency.

Rather it was being “implemented by US people”, he said.

“I am very concerned about what Donald Trump did, obviously because it is something that has Earth-shattering consequences globally - and no one could expect any Irish Government Minister to approve of what he did.

“Dublin Airport, that is an issue which will be discussed at Cabinet tomorrow and will be resolved, and Shannon as well, and I think at this stage it is probably unwise to say what would happen at all but it is important that Irish people aren’t caught in difficulties as well.”

Asked whether US visa pre-clearance facilities at Irish airports should be reviewed, he said: “I’ll be making my views known at Cabinet tomorrow about all these issues. I don’t think it would be right for me to say anything before I discuss it with my Independent Alliance colleagues.”

“That is the agreement which is being kept to at the moment. There is no Irish implementation of these particular measures.”

He was speaking as a group of Irish human rights organisations voiced concern “that the operation of US pre-clearance at Dublin and Shannon airports may result in individual gardaí and immigration officials providing assistance to US pre-clearance officials in implementing the executive order”.

In a joint statement, the groups, including the Immigrant Council of Ireland, Amnesty Ireland, Migrant Rights Centre of Ireland and Free Legal Advice Centres, welcomed the call by Ms Zappone for an urgent review of the pre-clearance agreement with the US.

It said the Government must “clarify the role of gardaí and immigration officials in the US pre-clearance process to ensure that in the exercise of their public functions, a person’s rights under the Irish Constitution, European Convention on Human Rights, EU law or international human rights law will not be violated”.

“Like many Irish people, I am deeply dismayed by the decision that has been taken by the new administration,” Mr Bruton told reporters on Monday.

“I think closing down access for refugees is a very serious step and it does raise threats to human rights. Equally, identifying countries from which no person can come creates real problems.”

He said people of all faiths and dimensions are likely to be adversely affected by the measures.

There have been calls for Mr Kenny to cancel his St Patrick’s Day trip to the White House to meet Mr Trump, but Mr Bruton insisted dialogue was the best way to address any concerns.

“The issue of what should happen with facilities at Shannon is a matter we will have to discuss with the Minister for Transport, Foreign Affairs and others when we convene in Cabinet tomorrow. I’m not going to say how that will be handled.”

Meanwhile, the mayor of Boston Marty Walsh has warned Mr Kenny to be careful of the optics of a visit to the White House on St Patrick’s Day.

“That’s going to be a decision that Mr Kenny will have to make. It would be positive for him to come over to talk about immigration policy and emphasise the importance of reform of immigration policy,” he told RTÉ.

Mr Walsh described the president’s two executive orders on immigration as “damaging and poorly thought out” but said authorities in Boston were doing their best to ensure citizens feel safe.

Boston is a so-called Sanctuary City, and Mr Walsh said that if an undocumented person was arrested on a non-felony charge then they would not be reported to the federal authorities.

“My police department has a job to do keeping people safe, they will not be carrying out the work of the immigration department.”

He added: “There were other ways to protect the US...It is just very unfortunate. I don’t know if people realise the ramifications of the President’s actions,” he said.

The co-founder of the Irish Lobby for Immigration in the USA, Ciaran Staunton, said he believed the Taoiseach should visit the White House on St Patrick’s Day despite the outcry over Mr Trump’s policies.

“Ireland is the only country in the world to have a standing appointment with the President of the USA every year,” he told RTÉ’s Today with Seán O’Rourke.

He said that during the Reagan era, despite protests, the visits had continued.

“Republicans control the House and the Senate - the Taoiseach needs to meet them.”