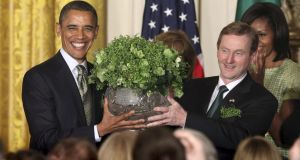 Minister of State for Training and Skills John Halligan has called on the Taoiseach to withdraw from his scheduled St Patrick’s Day meeting with President Donald Trump in the White House.

Mr Halligan, a member of the Independent Alliance, told The Irish Times it was his personal view Enda Kenny should not travel to Washington for the traditional ceremony where a bowl of shamrock is presented to the president.

“Unless he changes his views on issues like immigration, and his attitude to women, we should have as little as possible to do with the president,’’ he added.

Mr Halligan said the president was “close to being a fascist’’ and, if what was happening in the US took place in a country with which we did not have the same close relations, Ireland would be saying publicly how appalled it was.

Mr Kenny has come under significant pressure to boycott the annual event in protest at Mr Trump’s travel ban.

Labour leader Brendan Howlin claimed the Taoiseach’s presence in the White House would present Ireland as a “supine supporter’’ of Trumpism.

The Green Party, People Before Profit and the Anti-Austerity Alliance have also raised objections to the visit.

Minister for Children Katherine Zappone has said the invitation from Mr Trump should be kept under review.

Mr Martin said he strongly disagreed with the policy pursued by Mr Trump but insisted the St Patrick’s Day trip was an opportunity the country could not afford to miss.

He said: “The upcoming visit to Washington DC should be used as an opportunity to press President Trump on the plight of undocumented Irish and to explain in clear terms the mutual advantage to both our countries of the presence of US companies operating in Ireland.”

The Minister for Foreign Affairs said it would be wrong not to travel insisting dialogue between the two countries was essential.

Minister for Social Protection Leo Varadkar, speaking on RTÉ’s The Week programme said it was important to engage with the Trump administration and the meeting could not be just about “smiles and shamrocks’’.

The visit is expected to be raised with Mr Kenny at the weekly Fine Gael parliamentary party meeting on Wednesday when backbenchers have their say.

Dublin North West TD Noel Rock said matters had changed since Friday, with the introduction of the Muslim country travel ban, and he believed, right now, the Taoiseach should not travel.

“If he does go, he should deliver an honest and frank message to the president,’’ Mr Rock added.

Carlow-Kilkenny FG TD Pat Deering said Ireland had to respect the democratically elected president, whether it liked it or not.

“I think he should go but it should not be a happy, clappy event,’’ he added. “The Taoiseach should make his views known in a diplomatic way.’’

Calling on Mr Kenny to postpone the visit, Green Party leader Eamon Ryan said the banning of refugees, the support for torture and the bullying of the Mexican government were intolerable.

The US embassy in Dublin confirmed the executive order banning the entry of people from Iran, Iraq, Sudan, Libya, Yemen, Syria and Somalia is being implemented in Dublin and Shannon airports. These are the only airports in Europe providing US preclearance.

By last night there had been no reports of anyone being stopped at Dublin or Shannon boarding a US-bound flight.

A spokeswoman for Dublin Airport Authority said implementation of the ban was “nothing to do with” the authority and was “entirely a matter for the US embassy”.

Humanrights.ie, a site manned by human-rights legal experts, in a post over the weekend, said it was “arguable” that application of Mr Trump’s executive order, in Irish soil, was “unlawful”.

A spokesman for Mr Kenny, when asked whether there was a concern about the legality of the implementation of the ban on Irish soil, said he would not “get into those kind of details”.

Driver may have travelled 22km with explosive device attached to car 19:08
Destitute in Dublin: ‘You are vulnerable in a tent. Nowhere is safe’ 18:43
Dublin homes within walking distance of park are worth more, conference told 18:08
Man who denies murdering he father says he was his mate 18:07
Court hopes to make final ruling on McNamara and Lowe insolvency arrangement 17:49
SUBSCRIBER ONLY