US president Donald Trump's executive order closing the nation's borders to visitors and refugees from seven predominantly Muslim countries is met by nationwide protests and a successful lawsuit. Video: Reuters 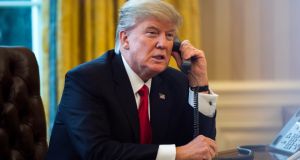 The Taoiseach intends to meet US president Donald Trump in Washington to mark St Patrick’s Day in order to ‘maintain the historically strong links between the Irish and American peoples,’ a Government spokesman has said. Photograph: Jim Lo Scalzo/EPA.

The Taoiseach intends to meet US president Donald Trump in Washington to mark St Patrick’s Day in order to “maintain the historically strong links between the Irish and American peoples”, a Government spokesman has said.

Enda Kenny is facing increasing pressure to reject Mr Trump’s invitation to meet him in March amid concern over a number of policies he has introduced, particularly in relation to immigration, since his inauguration less than two weeks ago.

Mr Trump has posted messages on social media standing behind an order he signed on Friday halting the entire US refugee programme for 120 days, indefinitely banning refugees from Syria, and blocking entry for 90 days for citizens from seven mostly Muslim countries: Iran, Iraq, Libya, Somalia, Sudan, Syria and Yemen.

A restriction on US residents holding green cards returning to the country from overseas travel has been loosened after days of confusion, protest and outcry over the sweeping immigration order, which was met with puzzlement at airports as customs and officials grappled with the new rules.

In a pair of Twitter posts on Monday, Mr Trump appeared to blame airport confusion on protesters, Democratic Senator Chuck Schumer, who had teared up while talking about the ban, and even a computer system failure at Delta Airlines late Sunday.

“Only 109 people out of 325,000 were detained and held for questioning. Big problems at airports were caused by Delta computer outage ... protesters and the tears of Senator (Chuck) Schumer. Secretary Kelly said that all is going well with very few problems. MAKE AMERICA SAFE AGAIN!” he wrote.

Minister for Children Katherine Zappone said on Monday that she had written to Mr Kenny outlining concerns about Mr Trump’s immigration measures. She has also asked for a full investigation of how the approach is being implemented at US immigration facilities at Irish airports.

“I am deeply concerned that the application of the Executive Order by preclearance officers in these areas, assisted by Gardaí and customs and excise officers, is resulting in people experiencing discrimination based on religion and nationality within our jurisdiction,” she said in her letter.

“I also wish to express my concerns about the implications of this Executive Order for Irish citizens who hold dual citizenship with listed states including those who were born there. It is not possible effectively to rescind citizenship in a number of these states: Iran, Syria, Libya and Yemen.

Only 109 people out of 325,000 were detained and held for questioning. Big problems at airports were caused by Delta computer outage,.....

protesters and the tears of Senator Schumer. Secretary Kelly said that all is going well with very few problems. MAKE AMERICA SAFE AGAIN!

There is nothing nice about searching for terrorists before they can enter our country. This was a big part of my campaign. Study the world!

“As you know, we have extensive obligations under the Constitution, EU law, and international human rights law, including obligations relating to non-discrimination. We also have a clear moral obligation to stand with our fellow human beings against discrimination of this kind.”

Ms Zappone’s stance is expected to be supported by Minister for Transport Shane Ross and Minister of State Finian McGrath, who intend to raise concerns about the policy at the weekly Cabinet meeting.

In a statement regarding Mr Kenny’s visit to Washington, the Government said: “In order to maintain the historically strong links between the Irish and American peoples it is important that the Taoiseach continues to engage with the US President and his administration in Washington around the events of St Patrick’s Day.

“Doing so allows the Taoiseach to outline, in person, his Government’s views on a range of issues, including business and economic ties, immigration and other matters of common interest. He will continue to act in the interests of Irish people and to that end he will raise these matters again this year.”

More than 30,000 people have put their names to an online petition calling on Mr Kenny to take a stand against the actions of the Trump administration by cancelling the visit.

Minister for Education Richard Bruton said he was “deeply dismayed” by Mr Trump’s ban on refugees and immigrants which he said raises a “threat to human rights”. The question of whether the enforcement of the ban at pre-clearance facilities in Irish airports has any legal implications will be discussed at Cabinet on Tuesday, he added.

“I think closing down access for refugees is a very serious step and it does raise threats to human rights. Equally, identifying countries from which no person can come creates real problems.”

Asked if Mr Kenny should reconsider his visit, Mr Bruton replied that dialogue was the best way to address these issues. “I believe the way we have to resolve this is to use our influence to try and - like other countries - influence the decision,” he said.

Minister for Finance Michael Noonan has urged Mr Kenny to meet Mr Trump despite the growing opposition to the annual White House visit.

“State visits aren’t always organised on the basis of friendships, and the Taoiseach will go and have a private conversation with him and give the Irish view on things,” Mr Noonan told the Limerick Leader.

“He’ll be highlighting his concerns around a range of issues and he’ll have a full discussion as he always does when he visit foreign leaders.”

Minister of State for European Affairs Dara Murphy said on Monday that he supported Mr Kenny’s plan to visit the White House on St Patrick’s Day.

Separately, Minister of State for Jobs John Halligan said Mr Kenny should not meet with the US president, describing Mr Trump as “close to being a fascist’’.

Mr Kenny met British prime minister Theresa May on Monday and her spokesman said a proposed state visit by Mr Trump to the UK would go ahead despite the outcry over his travel ban.

Downing Street said its position had not changed on the US president’s trip as Ms May came under pressure to downgrade or call off the visit. “An invitation has been extended and accepted,” a Number 10 spokesman said.

More than one million people havesigned a petition stating Mr Trump should not be given a state visit and it will now be considered for debate by MPs.